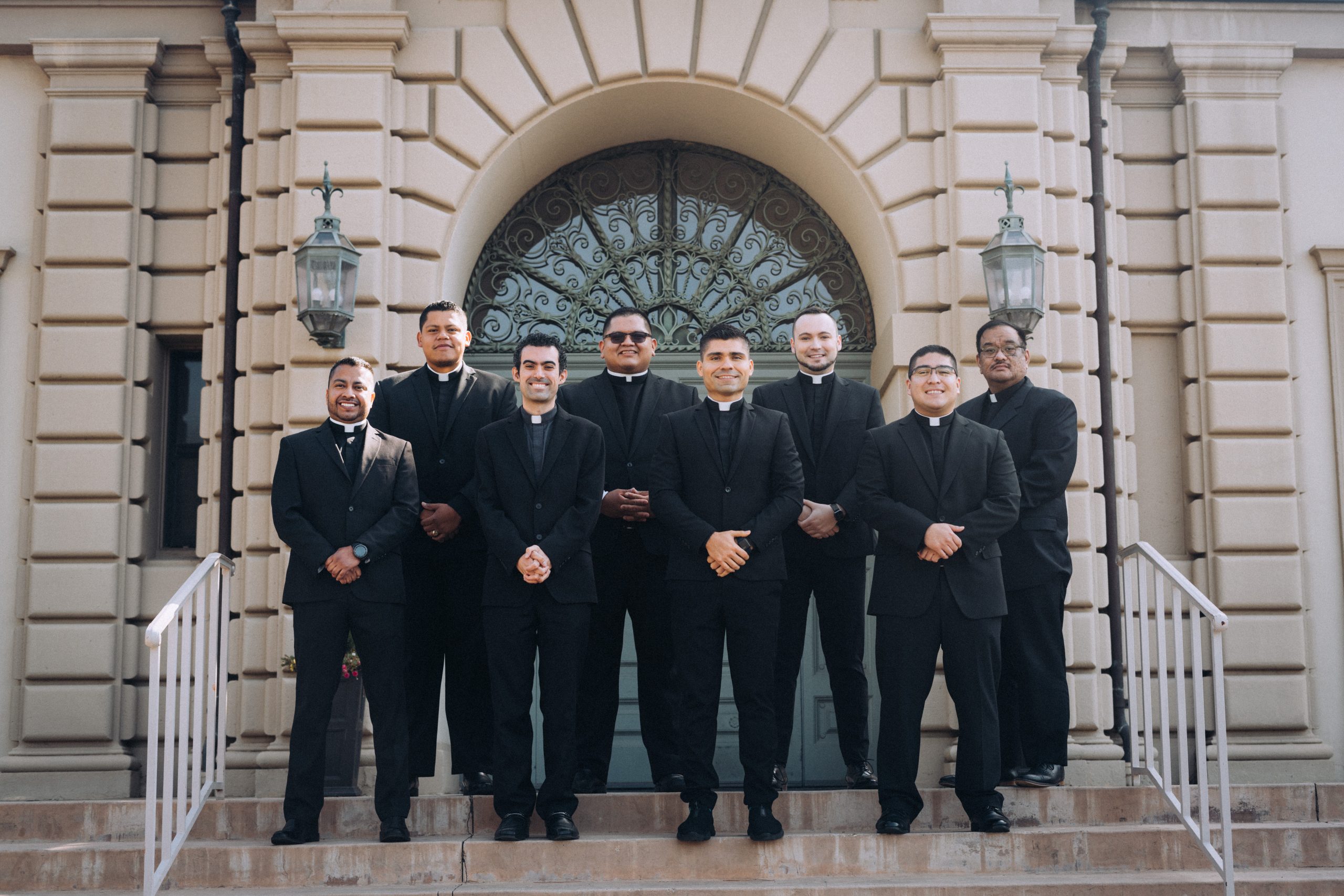 Eight new priests will be ordained on June 4, 2022, for the Archdiocese of Los Angeles as the annual Ordination Mass will be held in-person inside the Cathedral of Our Lady of the Angels. As in prior years, the ordination will be open to a limited amount of family members and friends of the ordinands. The ceremony will be livestreamed via lacatholics.org/ordination and facebook.com/olacathedral.

“The ordination of a man to the Priesthood of Jesus Christ goes back to the night of the Last Supper when Jesus instituted both the Eucharist and the Priesthood,” said Fr. Mike Perucho, the Archdiocese’s director of the Office for Vocations that hosts the ceremony. “For almost 200 years, priests have celebrated the Sacraments imparting God’s love upon the Church in an efficacious way that is visible and tangible. When celebrating the Sacraments, the priest stands in persona Christi (in the person of Christ) meaning that it is actually Jesus Christ himself, who imparts the Sacrament and the priest is used as an instrument of God. We continue to pray for and encourage, support and invite men to consider the priesthood. In knowing one’s vocation through prayer and discernment, they are able to say ‘yes’ to God and help sanctify the world.”

The men who will be entering the priesthood are Deacons Guillermo Alonso, Juan Cesar Martinez, Juan Gutierrez, Daniel Lopez, Justin Ordoveza, Ramon Reyes, Daniel Vega and Kamil Ziolkowski. All have completed five to seven years of theological formation at St. John’s Seminary in Camarillo, preceded by four years at Queen of Angels Center (for those who had not earn a university degree, which is mandatory), plus their service as transitional deacons and a year-long internship at different parishes in the Archdiocese. They will celebrate their first Mass as priests on Sunday, June 5, and will begin their parish assignments on July 1.

The Ordination Mass is a sacramental ceremony in which a man becomes a priest and is enabled to minister in Christ’s name and that of the Church. The essential rite of the Sacrament takes place during the Laying on of Hands and Prayer of Consecration, an ancient tradition in the Church, mentioned in the Bible. The ceremony included various rituals, rich in meaning and history, including prostration, or when the men being ordained lay face down before the altar as a symbol of their dependence upon God and the prayers of the Christian community. They also received their investiture, the vest or robe used by the priests when they celebrate Mass, from a priest, and were anointed with chrism oil, only used during baptisms and the anointing of the sick and dying.

Following are the biographies of the soon-to-be priests:

Home parish: Cathedral of Our Lady of the Angels

Fr. Guillermo Alonso is a native of East Los Angeles, born on September 1995. For much of his life, he has lived in Boyle Heights. He is the son of Mexican parents and the youngest of five children, who grew up attending Sunday Mass at Santa Isabel Catholic Church in Boyle Heights, where the seeds of his vocation towards the ministerial priesthood were sewn. He was given an opportunity by the De La Salle Brothers of the Christian Schools to study at Cathedral High School in downtown Los Angeles. While in high school, he was requested to help at the Cathedral of Our Lady of the Angels, and while doing so he also volunteered at Assumption Catholic Church in Boyle Heights, where his father participate in the choir. During his senior year, Memo, as he likes to be called, knew he wanted to devote himself to partake in a ministry of the Church but was not sure whether he should be a Lasallian Brother or pursue the diocesan priesthood. However, the Lasallian Brothers and the priests at the Cathedral of Our Lady of the Angels, all encouraged him to pursue priesthood. He entered into priestly formation in August 2014, three months after graduating from Cathedral High School. He earned a Bachelor of Arts degree in Philosophy of Religious Studies with a minor in Sociology from California State University of Dominguez Hills. In May 2019, he completed an online graduate program from the College of Business and Management at National University in La Jolla earning a Master of Science degree in Organizational Leadership.

Fr. Juan Cesar Martinez was born in Colima, Mexico. He grew up in Tepames, a small town in Colima, being raised by his late grandparents together with his four siblings. Around the age of eight the pastor of his home parish encouraged him to serve as an altar server, and after observing his pastor’s generosity for several years, he began to pray if the priesthood would be his call. Eventually, he earned a bachelors’ degree in Computer Science and then worked as an educator at an elementary school for two years. During that time, he felt God was calling him to formally discern his call to the priesthood. “During this time in my life, something was missing in my heart, I was happy but not fully fulfilled in what I was doing. Through prayer, silence and by spiritual direction I started to think that God was calling me to priesthood and eventually joined the seminary.”

Fr. Juan Gutierrez was born and raised near Mexico City to Leonor Sanchez and Fabian Gutierrez. He is the third of four children from both parents and then his father moved to the United States and had four more boys. A couple of years after graduating from high school in Mexico, he moved to Omaha, Nebraska, to live with his father, and worked in the small businesses owned by his father. He says his call to the priesthood came to him as a huge surprise, after having spent years not going to church. A spiritual retreat marked his return to the faith, and s time went on, he wanted to get more involved in parish ministry. He would attend daily Mass, visit Jesus in the Blessed Sacrament almost every day, pray the rosary, and more. The parish priests of the different churches he attended, along with parishioners would ask him if he had ever considered becoming a priest. To which I quickly he answered a “No, because I already had my life planned. With God in the picture of course, but not as a priest.” It took him a few years of prayer and “even fights with God,” and when he decided for the priesthood he moved to LA to enter seminary formation.

Born in 1990 in Glendora, California, Fr. Daniel Lopez is the youngest of six (3 men and 3 women). He attended Cal State Los Angeles where he obtained a bachelor’s degree in Sociology. Prior to the seminary, he worked in education. At the age of 15, he went through one of the hardest times in his life, when two of his high school classmates and his father had passed away. This led him to ask deeper questions of life and existence, such as What am I doing here? What is my purpose? It was through praying the rosary that his father left behind that helped him to deal with the restlessness of his heart. Then, he believes that through the maternal care of our Blessed Mother he was led into the Church when he was 17 years old. He begin to attend RCIA to receive the Sacraments of Baptism, Confirmation and Holy Communion. During that year of RCIA, it was the year for priests (2010) and praying for priestly vocations. As he was preparing to be baptized, he was also praying for vocations. “It was through the witness of priests and those prayers that planted the seeds of my vocation. Years later, as I was praying before the Blessed Sacrament, I came to the realization that not only God has called me to be part of His Church, but He was calling me to something deeper; He was calling me to be His priest.”

Fr. Justin Ordoveza is the only child of Filipino immigrants who grew up in a large multi-generational family home. He earned an Associate degree in Materials Science and Engineering from Don Bosco Technical Institute in Rosemead California, a Salesian high school and Technical School. He also received a scholarship to Southern Catholic college in Dawsonville Georgia and was part of its inaugural class. Before entering the seminary he worked as a contract tutor for the Long Beach School District working with children that needed additional help in math and English for two years. His calling to the priesthood was slow and gradual. He saw the happiness and joy from his parish priest in Our Lady Of Refuge in Long Beach.

Fr. Ramon Reyes was born and raised by immigrant Mexican parents, Ramon Pizano Reyes and Ramona Guzman Reyes, in the West Adams section of Los Angeles. He is the youngest of four siblings, two sisters, Juanita and Veronica, and an eldest brother, Samuel. Like most Angelinos, his sacramental journey started with baptism at Our Lady Queen of Angels (La Placita) followed by his First Communion at his neighborhood parish, St. Agatha, where he observed the pastor practiced what he preached. During his teenage years his parents attended St. Agnes daily morning mass, where the pastor steered him into recognizing his baptismal sonship. Then he started attending St. Thomas the Apostle with his mother, where his faith blossomed, and a priestly vocation arose from the spirit of the community. During his senior year at University High, the inspiration of becoming a priest cultivated from seeing the reality of our faith being lived out by the faithful. He kept pursuing God during his years as a full-time student at Fremont College where he studied Business Administration while working in different business start-ups. I recognized the face of God among the people that sought the same as I did. Love was what I was searching for, and I found it in the people of God.

Fr. Daniel Vega Daniel Vega was born in Los Angeles on December 1984. He spent most of his life growing up in Covina. With an older sister, a younger sister, and a younger brother, Daniel shared close memories with his family. As he grew up, Daniel became especially drawn to the arts and began dreaming about working in the animation industry. At the same time, he was also inspired by his uncle, Fr. Jose Vega, to consider the priesthood. Daniel decided first to pursue his dream job, leaving the seminary as a future option. After graduating from Mt. San Antonio College, he transferred to UCLA and got a Bachelor of Arts in English with an emphasis in creative writing. Daniel then went to graduate school at the UCLA Animation Workshop where he earned a Master of Fine Arts in Film and Television with an emphasis on animation. He then spent several years working in the animation industry, including three years on “The Simpsons” as a digital production assistant. But after hearing the call to discern the priesthood, Daniel left behind his career to study at St. John’s Seminary.

Fr. Kamil Ziolkowski was born and raised (together with his sister) in Poland, where he lived to the time of his high school graduation. He received the call to priesthood initially at the age of 14, and since that time he has been walking the path of priestly vocation. He said he has been looking forward to his Presbyteral Ordination and cannot wait to bring Christ to the multicultural faith community of the Archdiocese of Los Angeles!

For more information and to view the ordination, visit lacatholics.org/ordination and angelusnews.com/local.