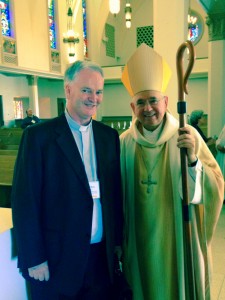 Pope Francis told the Vatican’s social media to “listen, converse and encourage” when embracing the challenges of the technical revolution, according to Msgr. Paul Tighe, the Pope’s social media expert, who spoke at the Archdiocese’s 3rd Annual Catholic Communication Collaboration (C3)
Technology Conference.

Msgr. Paul Tighe, Secretary to the Pontifical Council for Social Communications of the Vatican, shared this wisdom during his keynote speech on Aug. 13 to teachers, clergy and staff from the Archdiocese of Los Angeles who packed St. Robert’s Hall at Loyola Marymount University.

During his presentation, Msgr. Tighe discussed the Catholic Church’s emerging presence in the digital world.

With more than 10 million followers on Twitter, the Vatican’s resident expert on social media encouraged the audience to “develop their imagination” while introducing new ways of using social media.

This year’s conference, supported by the Loyola Marymount University School of Education, ran from August 11-14. It featured 40 workshops led by technology experts and leaders from the Archdiocese.

The conference caps off the 3 ½-year C3 Pilot Project by the Archdiocese. The pilot project was launched in 2010 at 25 parish and school locations to explore and implement innovative uses of technology. These include 1-to-1 student devices, training and professional development, digital content and curriculum, and an online GED program for adult learners. Eventually, it is hoped that the program will be active at the nearly 600 locations in the Los Angeles, Santa Barbara and Ventura counties of the Archdiocese. For more information about the conference, the pilot program and goals, visit http://www.la-archdiocese.org.