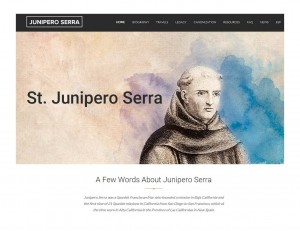 Archbishop Gomez to Speak at Special Conference Honoring Serra in Rome May 2; New Website on the Life and Legacy of Blessed Junipero Serra Launched Today as a Resource for the Public

The Vatican today confirmed that Pope Francis will canonize Blessed Junipero Serra on September 23, 2015 outside the National Shrine in Washington D.C. during the Pope’s first apostolic trip to the United States.  Blessed Junipero Serra, a Franciscan Friar who established the California Missions and secured a bill of rights for native peoples, will be the first Hispanic saint in the United States.

Archbishop José H. Gomez has also been invited to speak at the Pontifical North American College, Rome’s American seminary, during Pope Francis’ first visit there for a special conference on Saturday, May 2, honoring Blessed Junipero Serra.

“Father Serra’s canonization will be a great blessing,” Archbishop Gomez said. “Father Serra was a holy man who brought the good news of God’s love and mercy to the Americas. He was also a strong protector of the Native peoples. I think it is special that America’s first Hispanic saint will be canonized on American soil by Pope Francis, who is the first Pope from Latin America.” ​

Pope Francis will be the guest of honor at the May 2 Day of Prayer and Reflection for the conference, themed “Brother Junípero Serra: Apostle of California, Witness of Holiness.” The conference, a joint effort of the Archdiocese of Los Angeles, the College and the Pontifical Commission for Latin America, is designed to help spread awareness of Fr. Serra’s life, mission and testimony.

Archbishop Gomez, who heads the nation’s largest diocese, will discuss the origins of Christianity in America at the conference attended by historians, college seminarians and cardinals residing in Rome. After the conference, Pope Francis will celebrate a Mass honoring Blessed Junipero Serra at the College.

In preparation for the upcoming canonization, a new website, http://stjunipero.org/, on the life and legacy of Blessed Junipero Serra launched today to serve as a resource for the public.  Msgr. Francis J. Weber, archivist emeritus of the Archdiocese and author of several books on Blessed Junipero Serra and the California Missions contributed to the site and explained that “in order to understand why Father Serra is being canonized, we need to understand the real story of why he is being considered for sainthood.”

To find out more about Archdiocese of Los Angeles news and events or to subscribe to media alerts, please visit https://media.la-archdiocese.org.