Home   |   Press Releases   |   THOUSANDS HONOR OUR LADY OF GUADALUPE WITH DANCE, MUSIC AND PRAYER AT THE 84TH ANNUAL PROCESSION AND MASS IN EAST L.A.

THOUSANDS HONOR OUR LADY OF GUADALUPE WITH DANCE, MUSIC AND PRAYER AT THE 84TH ANNUAL PROCESSION AND MASS IN EAST L.A. 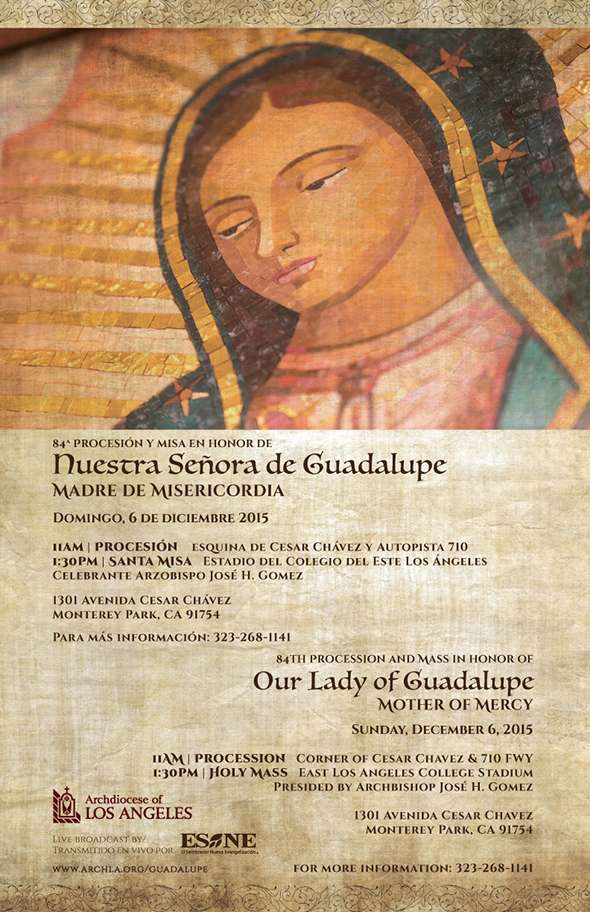 Southern California Faithful Unite in Prayer for Peace and Mercy

Tens of thousands of devotees from Santa Barbara, Ventura and Los Angeles counties marched down East Los Angeles streets today to honor Our Lady of Guadalupe, the patron saint of the Americas, in the 84th Annual Procession and Mass. This year’s event, themed “Mother of Mercy,” aimed to prepare the faithful for the Year of Mercy, designated by Pope Francis to encourage faithful worldwide to rediscover the mercy of the Lord.

The mile-long procession – the oldest religious procession in Los Angeles – included colorful floats, equestrian groups, mariachis, indigenous dancers, and Catholic school students escorting the Peregrina, the official Archdiocesan pilgrim image of the Virgin of Guadalupe. Many wore red and green attire to resemble the flag of Mexico where Our Lady of Guadalupe appeared to St. Juan Diego.

The procession ended at East Los Angeles College Stadium in Monterey Park. White doves were released as the Peregrina entered the stadium, where Archbishop José H. Gomez celebrated a special Mass in her honor.

“We want to pray to the Virgin today in a special way for our brothers and sisters in San Bernardino. Let’s pray for the families of those who were killed and pray for healing for those who were wounded,” said Archbishop Gomez during the Mass homily. “Let’s entrust the innocent victims to the mercy of God and let’s ask Our Mother of Mercy to bring conversion to the hearts of all those who are consumed by hatred.”

In 1531, the Virgin appeared to Juan Diego, a humble native, at Tepeyac, Mexico, and asked him to build a church on a hilltop. She miraculously left her image on his cloak, or tilma, which he presented to the bishop as proof of her request. Since then, the image of Our Lady of Guadalupe has been a symbol of faith, unity and mercy for people all over the world.

“During this Year of Mercy, let’s try to walk more closely with God on “two-way street” of mercy — receiving God’s mercy and showing mercy to others,” said Archbishop Gomez.

This year’s pilgrimage of the framed images of Our Lady of Guadalupe and St. Juan Diego began on October 9 at St. Joseph Church in Carpinteria. The faithful from more than 20 parishes and three detention centers in the tri-county Archdiocese welcomed the images with worship services and parish celebrations, leading up to today’s procession and Mass in East L.A.

**NOTE: Photos from the event can be made available upon request.**