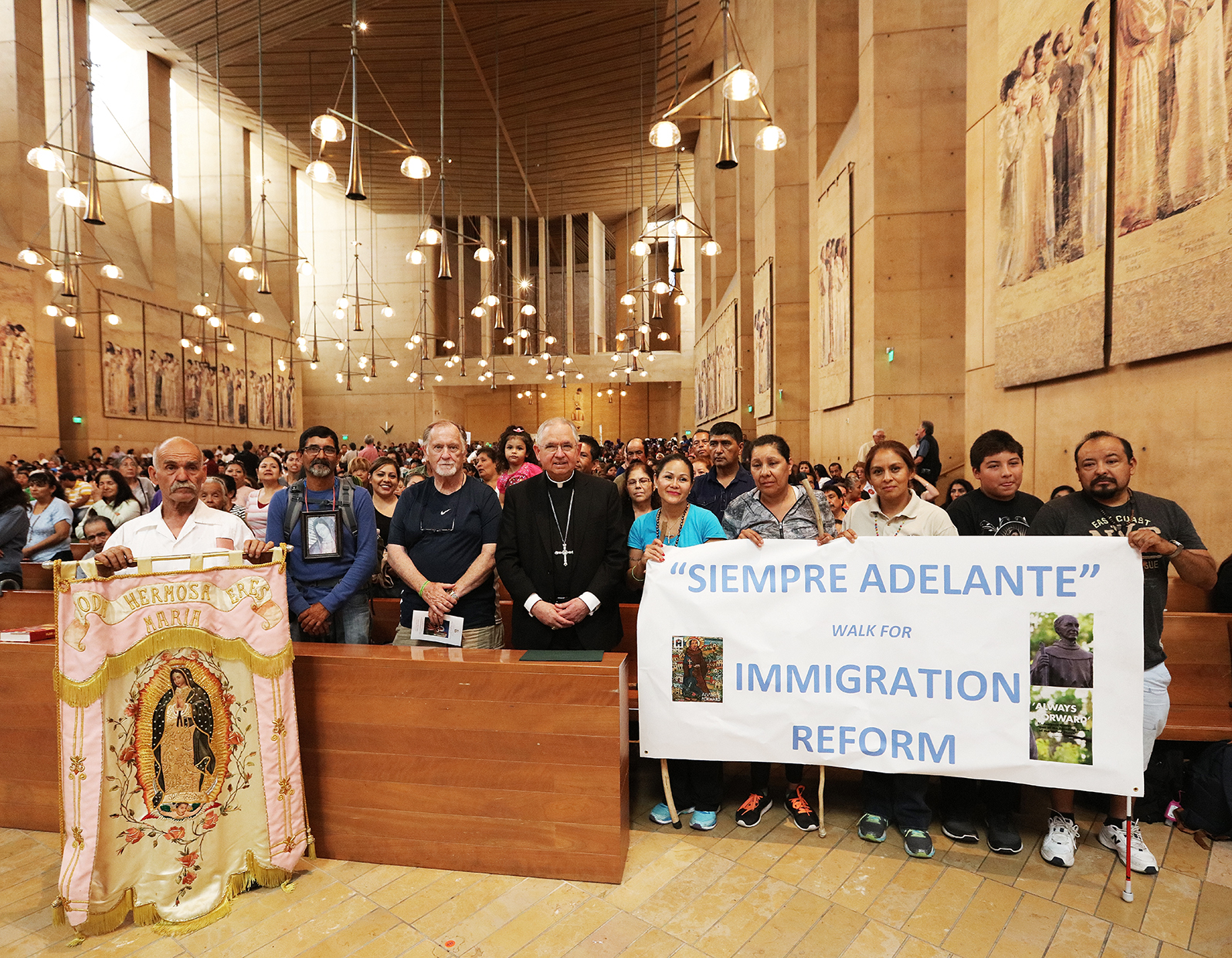 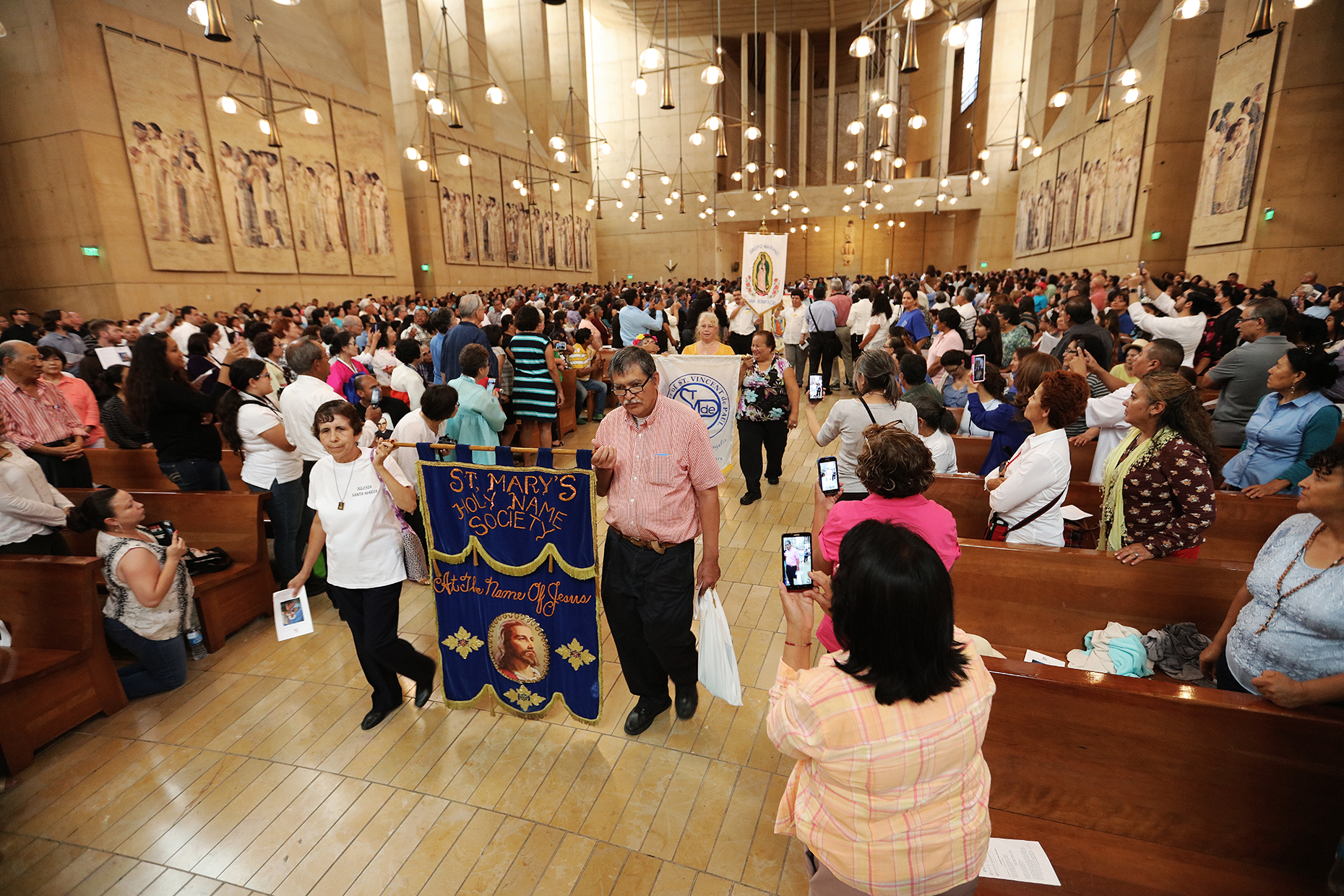 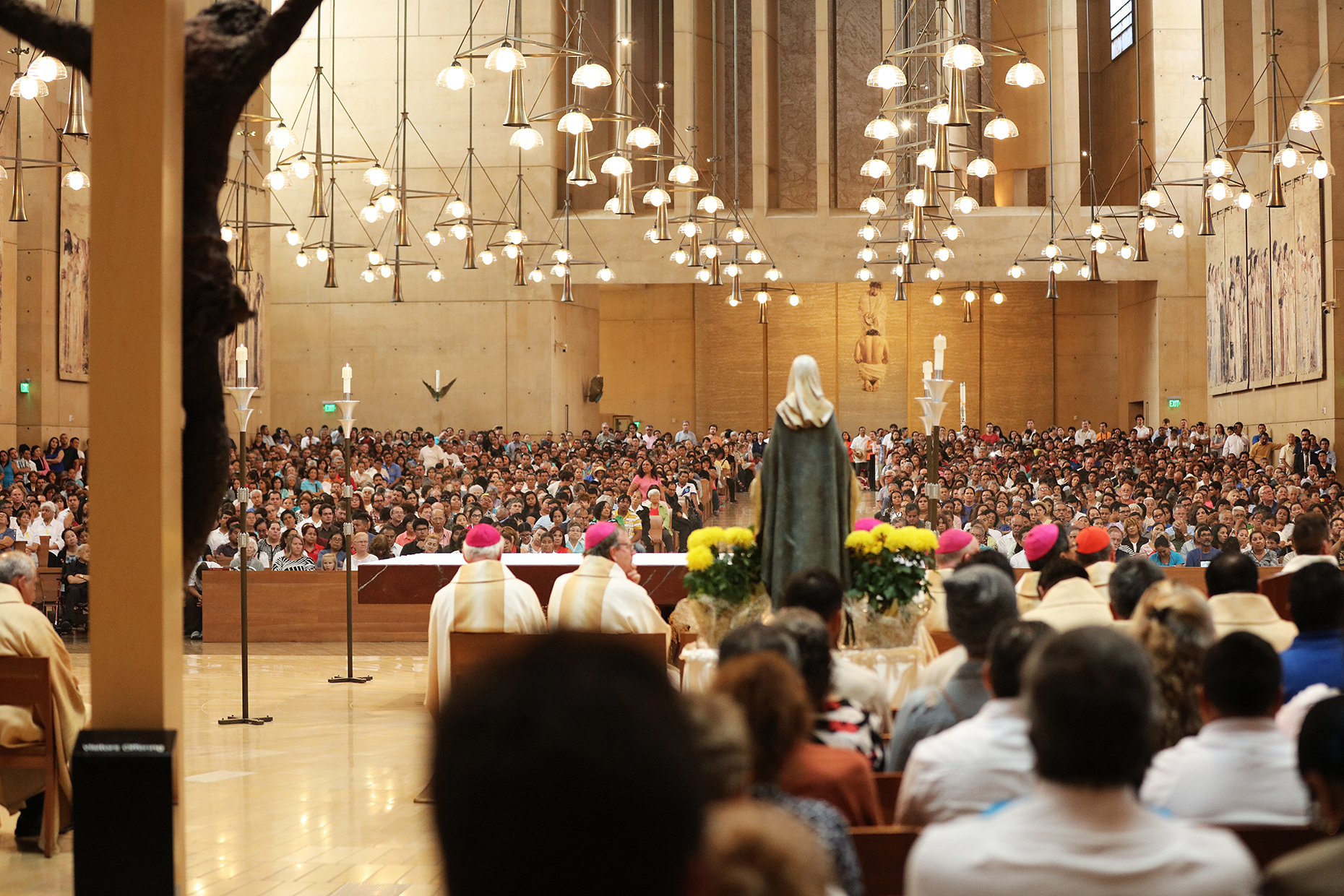 Pilgrims from different nationalities and backgrounds challenged themselves to walk long distances today to raise awareness of the dire need of comprehensive immigration reform, attending the call to be merciful and compassionate in this Year of Mercy. They joined thousands of faithful, including those from the Archdiocese of Los Angeles and Dioceses of San Bernardino and Orange who gathered today for a special Mass in Recognition of All Immigrants presided by Archbishop José H. Gomez at the Cathedral of Our Lady of the Angels in downtown Los Angeles.

On Friday, July 15, a group from Lake Forest began a three-day, 50-mile walking pilgrimage to the Mass to unite the faithful in prayer and reflection for all those impacted by the broken immigration system. The pilgrimage, called “Siempre Adelante” (Always Forward), was dedicated to St. Junípero Serra– whose first feast day was July 1– as it follows part of the same route he traveled with fellow missionaries to found the first nine missions in California.

Before Mass, immigrants of diverse backgrounds shared testimonies including Emiliano Leonides, one of the leaders of the “Siempre Adelante” pilgrimage for a second consecutive year and catechist at Santiago de Compostela Church in Lake Forest. “I’m here to ask God and all the people attending the Mass in Recognition of All Immigrants to not forget how much we suffer when pursuing our dreams and crossing the border,” said Leonides. “We are sending the message to those in power that there’s a need to change the laws for a comprehensive immigration reform and stop the separation of families.”

“I am walking with them to raise awareness about the need of a comprehensive immigration reform and to let people know what the Constitution states: that we are one under God. God loves all his children,” said Lily Nguyen-Ellis, also a parishioner of Santiago de Compostela Church, who joined the pilgrimage for the first time this year.

“In this Year of Mercy I want to show people that immigration isn’t just about talking, it’s about doing, and we’re all immigrants one way or another,” said Nguyen-Ellis, who was also undocumented, arriving in the U.S. in 1984 from Vietnam with both parents and five siblings when she was 17 years old.

She decided to participate in the pilgrimage about a month ago, and immediately challenged herself to walk at least a couple of hours a day on her own, and ended walking seven hours in one day. “Just to make sure I would be able to walk the 53-mile pilgrimage,” said the 49-year-old hairdresser. It was hard, but worth it. We have been helping each other and getting to know each other better,” said Nguyen-Ellis.

A group of 20 pilgrims from Holy Family Catholic Church in Wilmington journeyed 20 miles on foot to the Cathedral to offer prayers of solidarity for all immigrants. The group was led by long-time parishioner and Eucharistic minister, Maria Mejia. “Our country has been built my immigrants and as we traveled on foot to the Cathedral we prayed for all immigrants and for immigration reform that is just and honors all human life,” said Mejia.

A pre-gathering procession began inside the Cathedral just before Mass and included representatives from parishes throughout Southern California and people impacted by the broken immigration system, including DACA students, parents eligible for DAPA and families facing separation, as well as refugees and expatriates from different nationalities. Members of the interfaith community will also be present. Local immigrants shared their testimonies, including:

During the Mass, prayers were offered in French, Spanish, Polish, Vietnamese, Swedish and English for immigrant families suffering in the shadows from poverty and brokenness.

The relics of Saints Junípero Serra, Frances Xavier Cabrini and Toribio Romo were on display during the Mass and available for public veneration following the Mass. These saints are of great significance to the Catholic immigrant community in the U.S. from its founding to present day.

The Mass in Recognition of All Immigrants was live streamed via Facebook Live: https://www.facebook.com/olacathedral.

1: Archbishop José H. Gomez is flanked by pilgrims from Santiago de Compostela Church in Lake Forest who walked a three-day 53-mile walk from Orange County to the Cathedral of Our Lady of the Angels to raise awareness of the dire need of a comprehensive immigration reform, and to participate in the Mass in Recognition to All Immigrants celebrated by Archbishop Gomez on July 17.

2: Different parish groups from the Archdiocese of Los Angeles, and the Diocese of Orange and San Bernardino process down the center aisle of the Cathedral of Our Lady of the Angels during the Mass in Recognition to All Immigrants on July 17.

3: About 5,000 people celebrated the lives and hard work of millions of immigrants during the annual Mass in Recognition to All Immigrants on July 17 at the Cathedral of Our Lady of the Angels, where Archbishop José H. Gomez remembered during his homily the contributions to the United States by immigrant Saints Junípero Serra, and Frances Cabrini, and the love for immigrants of Santo Toribio Romo. He said “it’s time to take action in favor of a comprehensive immigration reform,” and called for “no more deportations and separation of families.”