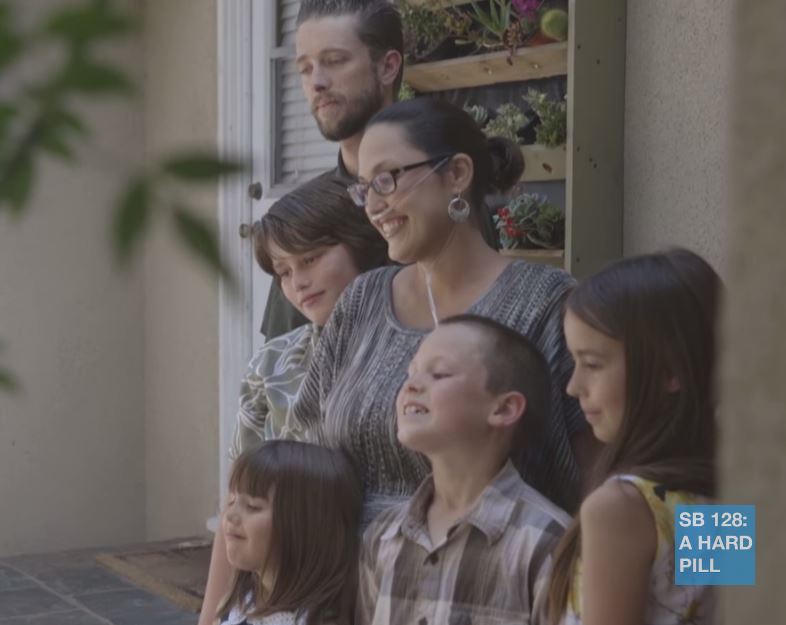 Stephanie Packer, a Southern California mom who has survived longer than her doctors predicted, shares her story of how she and her family are fighting the odds each day to be together as long as possible and calls for legislators to reject California State Senate Bill 128 (SB 128).

SB 128 would authorize doctors to prescribe lethal pills to terminally ill patients for the purpose of committing suicide.

“This bill diminishes every single thing that I go through – it takes away from my fight and makes the bad days worse,” said Stephanie in the video posted on the website ahardpill.org. “When anyone else is suicidal we get them help and send them to a doctor, we don’t hand them a gun.”

In 2012, after suffering a series of debilitating lung infections, Stephanie was diagnosed with scleroderma – a rare disease causing hardening of the skin and other organs – affecting her lungs.

Stephanie contacted the Office of Life, Justice and Peace of the Archdiocese of Los Angeles to share her story and help in the efforts to stop SB 128 from taking the lives of others who may feel lost and think there is no other option.

“We thank Stephanie and her family for bravely coming forward to speak up against bad legislation that misleads those in their final hours to think that suicide is the only option,” said Kathleen Buckley Domingo, Associate Director of the Office of Life, Justice and Peace.

Assisted suicide legislation has been attempted more than 100 times in the past 20 years, but is only legal in three states. In Oregon, legalization of assisted suicide was followed by a 49 percent increase in suicides by people who were not terminally ill, which is 41 percent higher than the national average.

“If we allow assisted suicide, we are telling anyone who is weak, vulnerable or poor that they are a burden, and that it would be better if they just went away,” Kathleen added. “Compassion is not found in investing in suicide. True compassion is found in proven options, like palliative and hospice care, that include comprehensive symptom management and psychological, social, and emotional support for patients and their families.”

Stephanie’s story can be viewed and shared via these links: