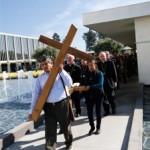 Archbishop José H. Gomez, bishops and clergy from Southern California led a procession at the end of the second annual Immigration Summit at Christ Cathedral on Feb. 27. At the front of the procession was the Cross of Encuentros, blessed by Pope Francis in Philadelphia, Sept. 2015. It represents the journey of the Latino/Hispanic Catholics in the U.S. in the last 50 years. Photo credit: Victor Aleman/Archdiocese of Los Angeles 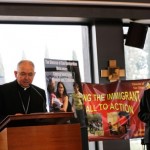 Archbishop José H. Gomez encouraged more than 400 parish leaders attending the second annual Immigration Summit at Christ Chathedral on February 27, to work this year on naturalization and citizenship. “This will make a real difference in the lives of hundreds of thousands of people,” he said. Photo credit: Victor Aleman/Archdiocese of Los Angeles

The Immigration Summit “Hosting the Immigrant: a call to action,” featured testimonials from immigrants and refugees, and Migrant Stations of the Cross, created with immigrants’ personal belongings found along the U.S.-Mexico border

The Summit, attended by more than 400 leaders representing more than 100 parishes in Southern California and the dioceses of Fresno, San Jose and Monterey, was held parallel to the Religious Education Congress, hosted by the Archdiocese of Los Angeles’ Office of Religious Education – the nation’s largest annual gathering of Catholics – at the Anaheim Convention Center (February 25-28).

Parish leaders from throughout Southern California gather each year at the summit to discuss the efforts of the Catholic Church to help immigrants who are impacted by the broken U.S. immigration system.  As part of this year’s summit, the bishops launched an integrative parish initiative that will help thousands of U.S. permanent residents on the path to citizenship.

“Our struggle has never been about politics. It’s always been about people. People who are hurting and exploited, people who are dying,” said Archbishop Gomez. “If we work this year to encourage naturalization and citizenship —this will make a real difference in the lives of hundreds of thousands of people. We have to keep concentrating on the “human face” of immigration reform —the names, the stories, the families. Mothers and fathers, sons and daughters. We need to show that these faces today are no different from the generations of immigrants that came before,” he said.

The initiative, which is parallel to the Church’s ongoing efforts toward a comprehensive immigration reform and an answer to Pope Francis’ call to action during the Jubilee Year of Mercy, will bring together the California Catholic Conference of Bishops, diocesan administrations across the state, Catholic Charities, and local parishes in a coordinated effort to offer practical assistance for legal residents seeking citizenship. According to the Department of Homeland Security, there are an estimated 2.4 million legal permanent residents eligible for naturalization in California.

Upon the conclusion of the meeting, the bishops and clergy led a procession through the Migrant Stations of the Cross displayed on the campus, called A journey of hope along the migrant trail: “A Via Crucis Migrante.” This was created with personal belongings of immigrants found along the U.S.-Mexico border. It offers a powerful, prayerful encounter that brings to light the plight of migrants, refugees and all the marginalized.

In honor of the Year of Mercy and Pope Francis’ faithful leadership on this issue, the procession was led by the Cross of the Encuentros, blessed by the Holy Father during his visit to Philadelphia, which symbolizes the faith journey of Hispanic/Latino Catholics in the U.S. in the past 50 years. The Cross was brought from El Paso, where it was held as a banner during the Mass presided by Pope Francis in Juarez.

With the Encuentro Cross standing next to the podium, Archbishop Gomez encouraged participants to “rededicate ourselves to our people —to their names, their stories, their families.”

Saturday’s Summit builds on the success of prior programs that resulted in parish-based workshops to help thousands of immigrants obtain their licenses under AB60, shelter and legal representation for unaccompanied minors, and community education classes and other resources for immigrants.

For more about Archdiocese of Los Angeles news, events and to subscribe for media alerts visit media.la-archdiocese.org.