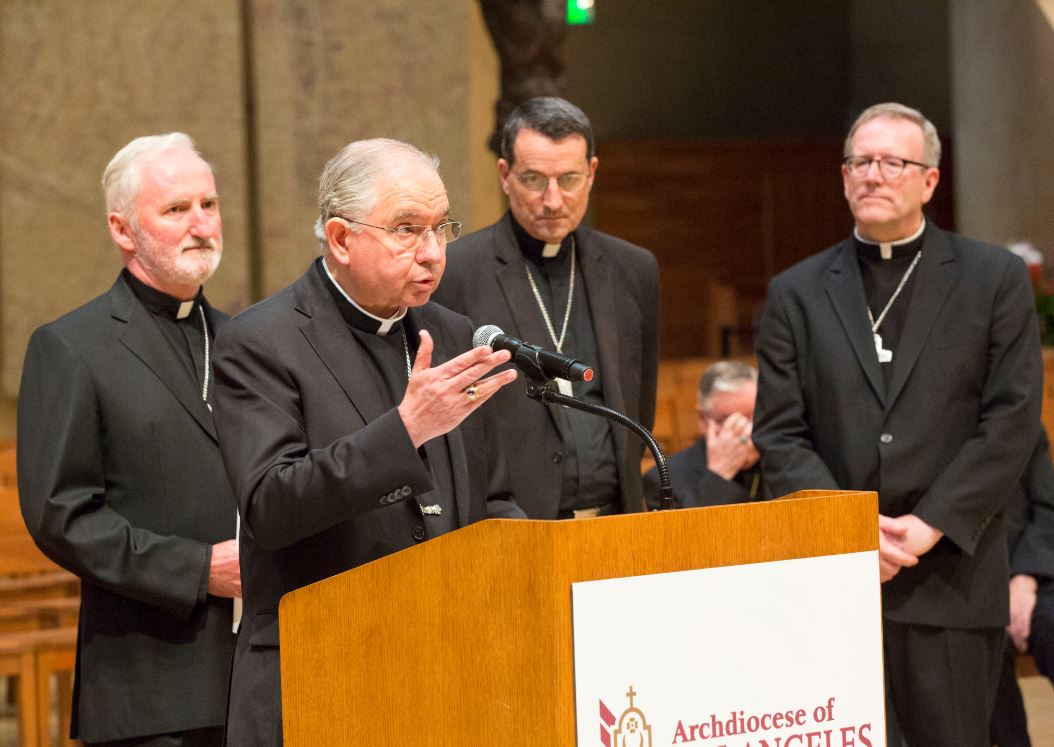 Pope Francis today named Msgr. David O’Connell and Msgr. Joseph V. Brennan from Los Angeles and Father Robert Barron from Chicago auxiliary bishops of the Archdiocese of Los Angeles. Also, today Pope Francis accepted the retirement of Bishop Gerald Wilkerson, Auxiliary Bishop for the San Fernando Pastoral Region, upon reaching the retirement age for bishops, which is 75 years old. Archbishop José H. Gomez and the bishops-elect addressed the L.A. media on the Pope’s announcements at a press conference today at the Cathedral of Our Lady of the Angels in downtown Los Angeles.

The Archbishop then addressed the Papal announcement on the newly appointed auxiliary bishops, explaining that “itis clear that in appointing these new auxiliary bishops, Pope Francis really understands what the Church needs— not just here in Los Angeles, but also in the United States and across the Americas.”

“I believe each of these new auxiliary bishops will help us in our mission here in the Archdiocese of Los Angeles—the beautiful mission we have of sharing the love of God and the message of Jesus Christ and promoting human dignity and mercy and justice in our society,” added the Archbishop

Originally from County Cork, Ireland, Bishop-elect O’Connell was ordained to the priesthood in 1979. He has served as Associate Pastor at St.Raymond in Downey (1979-1983), St.Maria Gorettiin Long Beach (1983-1984), and St. Hillary in Pico Rivera (1984-1988), and then as Pastor of St. Frances X. Cabrini (1988-2003) and Ascension Parish in Los Angeles (1998-2003), Administrator Pro-temp at St. Eugene (2004-2006) and Pastor of St. Michael Parish (2003-2015). He has worked to end gang violence in the inner city and serves on the Archdiocese’s pastoral committee on immigration supporting L.A.’s immigrant community in the struggle for comprehensive immigration reform to help all impacted by our broken immigration system.

“The greatest joy of my life is being a pastor,”said Bishop-elect O’Connell. “I think our parishes and schools are powerful instruments of transformation of people’s lives and of neighborhoods. I hope that as an auxiliary bishop I can continue to be a good pastor for the people.”

“I am humbled and deeply indebted to Pope Francis and Archbishop Gomez for this great honor and responsibility,” said Bishop-elect Brennan. “I am blessed to be able to continue to serve in such a beautiful community of faith deeply rooted in our Church’s mission of mercy and service. We can see this in the many wonderful good works to help those in need at all of our 287 parishes.”

Bishop-elect Barron was ordained to the priesthood in 1986. Shortly after his ordination, he served as associate pastor at St. Paul of the Cross Parish in Park Ridge, Ill (1986-1989). He was then appointed to the theological faculty of Mundelein Seminary, and has served as a visiting professor at the University of Notre Dame and at the Pontifical University of St.Thomas Aquinas in Rome, as well as scholar in residence at the North American Pontifical College at the Vatican. Bishop-elect Barron is the founder of Wordon Fire,a global media ministry which has been spreading the message of the New Evangelization since the year 2000. He is currently the Rector/President of Mundelein Seminary University of St.Mary of the Lake, in the Archdiocese of Chicago.

“I am grateful to Pope Francis for his confidence in me and to Archbishop Gomez for his willingness to allow me to minister in this beautiful, richly diverse, and spiritually vibrant Church,” said Bishop-elect Barron. “I have visited the Los Angeles area many times, including seven or eight journeys to speak at the legendary Religious Education Congressin Anaheim. So although I cannot say that I know this Archdiocese well, I have indeed been able to taste and see some of its goodness.”

Archbishop Blase Cupich of the Archdioceseof Chicago added his words of support and congratulations on behalf of the faithful in Chicago in a statement on the Papal announcement.

“The Holy Father’s appointment of Bishop-elect Robert Barron as an Auxiliary Bishop of the Archdiocese of Los Angeles today, brings honor to the Archdiocese of Chicago and the University of St. Mary of the Lake, Mundelein, where he has served as Rector since July 1, 2012,” expressed Archbishop Cupich.“We are grateful to Pope Francis. Fr Barron has been a singular blessing to our local Church and is recognized nationally for his great abilities and talents. We know that he willcontinue to make us proudas hebegins his newministryon the WestCoast.We congratulate himand Bishops-electJoseph Brennanand David O’Connell, and wishthemandthe Archdiocese of Los Angeles everyblessing as they share in the pastoral ministry of Archbishop Jose Gomez, who, like Pope Francis, is a loving shepherd of his flock.”

The Archdiocese of Los Angeles is the largest Archdiocese in the United States with approximately five million Catholics. The bishops elect will serve as regional bishops in the Santa Barbara, San Gabriel and San Fernando Pastoral Regions.

For more information regarding the announcement and on each of the newly named bishops, visit http://www.angelusnews.com/and for the press kit, visit https://drive.google.com/file/d/0B7kfa6vaqidgc09rZDUxeEV4ZzA/view?usp=sharing.