Home   |   Press Releases   |   ONELIFE LA UNITES MORE THAN 15,000 IN CELEBRATION OF THE BEAUTY AND DIGNITY OF EVERY HUMAN LIFE IN DOWNTOWN LOS ANGELES

ONELIFE LA UNITES MORE THAN 15,000 IN CELEBRATION OF THE BEAUTY AND DIGNITY OF EVERY HUMAN LIFE IN DOWNTOWN LOS ANGELES

More than 15,000 Southern Californians, and a diverse roster of local and internatio
nal speakers and celebrities, joined Archbishop José H. Gomez at OneLife LA, on Saturday, January 23, 2016 at Grand Park in downtown Los Angeles. OneLife LA, the only large-scale event that celebrates the beauty and dignity of every human life from conception to natural death, drew thousands throughout Southern California.

“OneLife LA means sharing the love of God with others – especially those who are poor and forgotten, and those who are alone and excluded,” said Archbishop Gomez. “With God’s love – there are no boundaries, no borders, no barriers. Let’s keep building our friendships and together let us build a Los Angeles that welcomes life and serves life and celebrates life.”

Inspired by the example of Pope Francis, OneLife LA seeks to promote a culture of life, where every human life is valued, especially the marginalized. Events marked the 43rd anniversary of Roe vs. Wade decision that legalized abortion.

The second annual event, themed “Who do you live for?” kicked-off at La Placita Olvera with a welcoming from Archbishop Jose H. Gomez, remarks from Bishop Charles Blake of the West Angeles Church and an address from Bishop Gerald Barnes of the Diocese of San Bernardino. 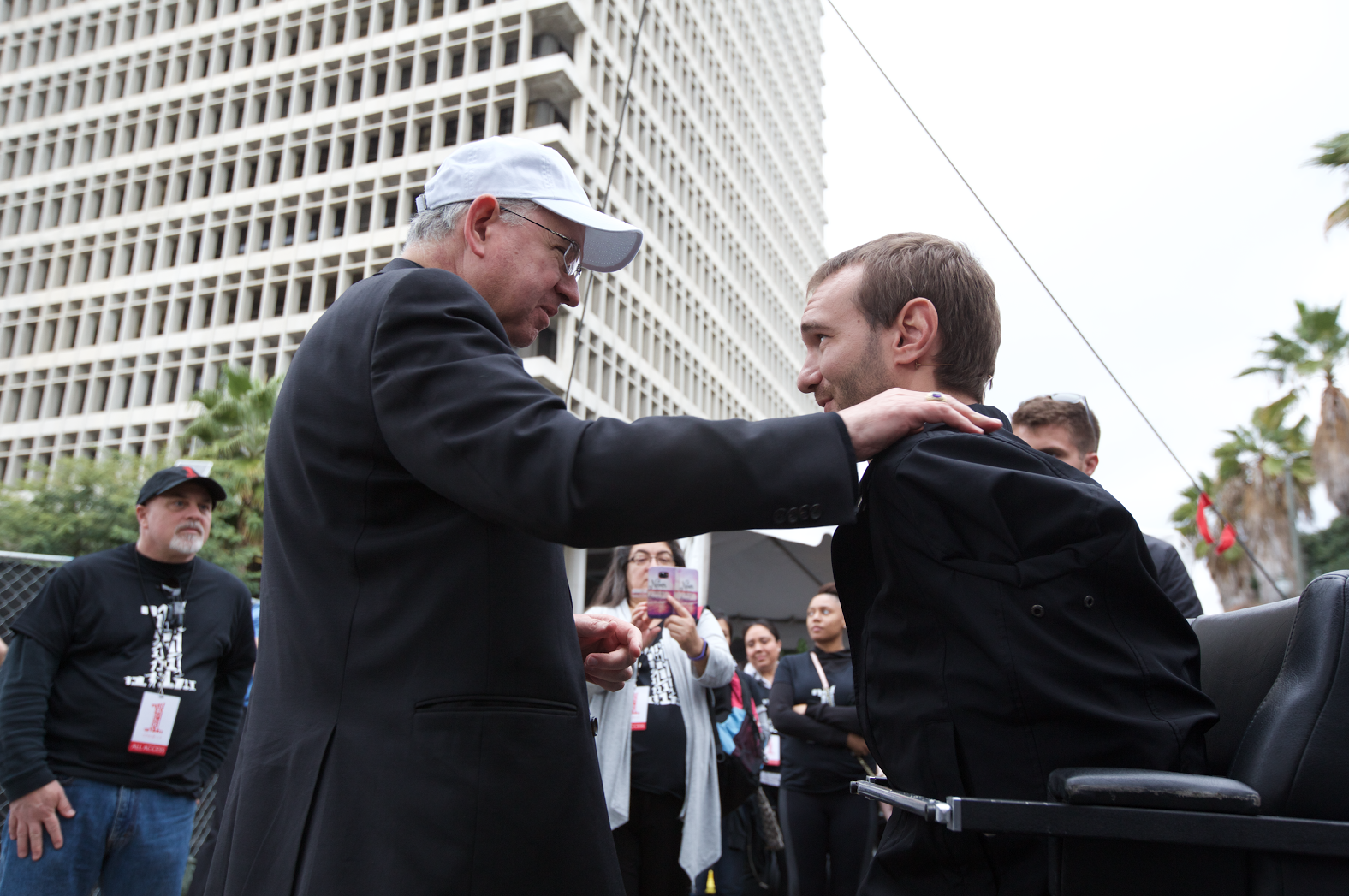 star Alexander Acha took the stage at OneLife LA and introduced keynote speaker, Nick Vujicic, who travels around the world sharing his powerful story of challenges and blessings despite being born without limbs, spoke about his passion for life and achieving victory over his struggles through faith. “If God can use a man without arms and legs to be his hands and feet, then he will certainly use any willing heart,” said Vujicic. His deep-rooted faith helped him see his disability as a blessing and formed the nonprofit organization Life Without Limbs when he was 17 years old.

Local hero, retired LAUSD school teacher, Millicent “Mama” Hill spoke about founding Mama Hill’s Help out of her living room in Watts to keep kids off the streets and focus on education.

Latin Grammy nominated Trio Ellas performed throughout the program, which featured a special tribute to baby Shane and his parents Jenna and Dan, who shared their story about learning of Shane’s dire diagnosis while they were expecting and celebrating his life through a lifetime worth of adventures and love before he was born.

The public also enjoyed a special sneak peek of “The True Meaning of Love,” a short film written, produced and directed by international Latina actress and pro-life advocate Karyme Lozano. She is also a co-founder of the Vida Initiative through which she is publishing a pro-life magazine entitled Dare to Be…Mother. Karyme Lozano was one of the event’s presenters.

In solidarity with Pope Francis’ call to show love to others during this Year of Mercy, OneLife LA united with more than 20 community partners to encourage event attendees to get involved in community activities such as feeding the homeless, finding families for foster children, supporting pregnant women, and visiting the elderly. Attendees had the chance to donate their hair to an organization that creates hairpieces for disadvantaged children with medical hair loss. Other organizations present were those dedicatedto create human trafficking awareness and education, as well as service projects sign-ups, and collection of clothing and toiletries for victims. For more information about OneLife LA community partners visit http://onelifela.org/sponsors-and-partners/.

OneLife LA was followed by the “One Life, One Light Requiem for the Unborn” Mass celebrated by Archbishop Gomez at the Cathedral of Our Lady of the Angels. This special Mass included a candlelight memorial with 220 candles representing each unborn baby of Los Angeles in 2015.

OneLife LA, spearheaded by the Archdiocese’s Office of Life, Justice and Peace, was first celebrated on January 17, 2015.