Home   |   Press Releases   |   ONELIFE LA EXPECTED TO DRAW THOUSANDS TO DOWNTOWN LA ON JAN. 23 IN CELEBRATION OF THE BEAUTY AND DIGNITY OF EVERY HUMAN LIFE

ONELIFE LA EXPECTED TO DRAW THOUSANDS TO DOWNTOWN LA ON JAN. 23 IN CELEBRATION OF THE BEAUTY AND DIGNITY OF EVERY HUMAN LIFE 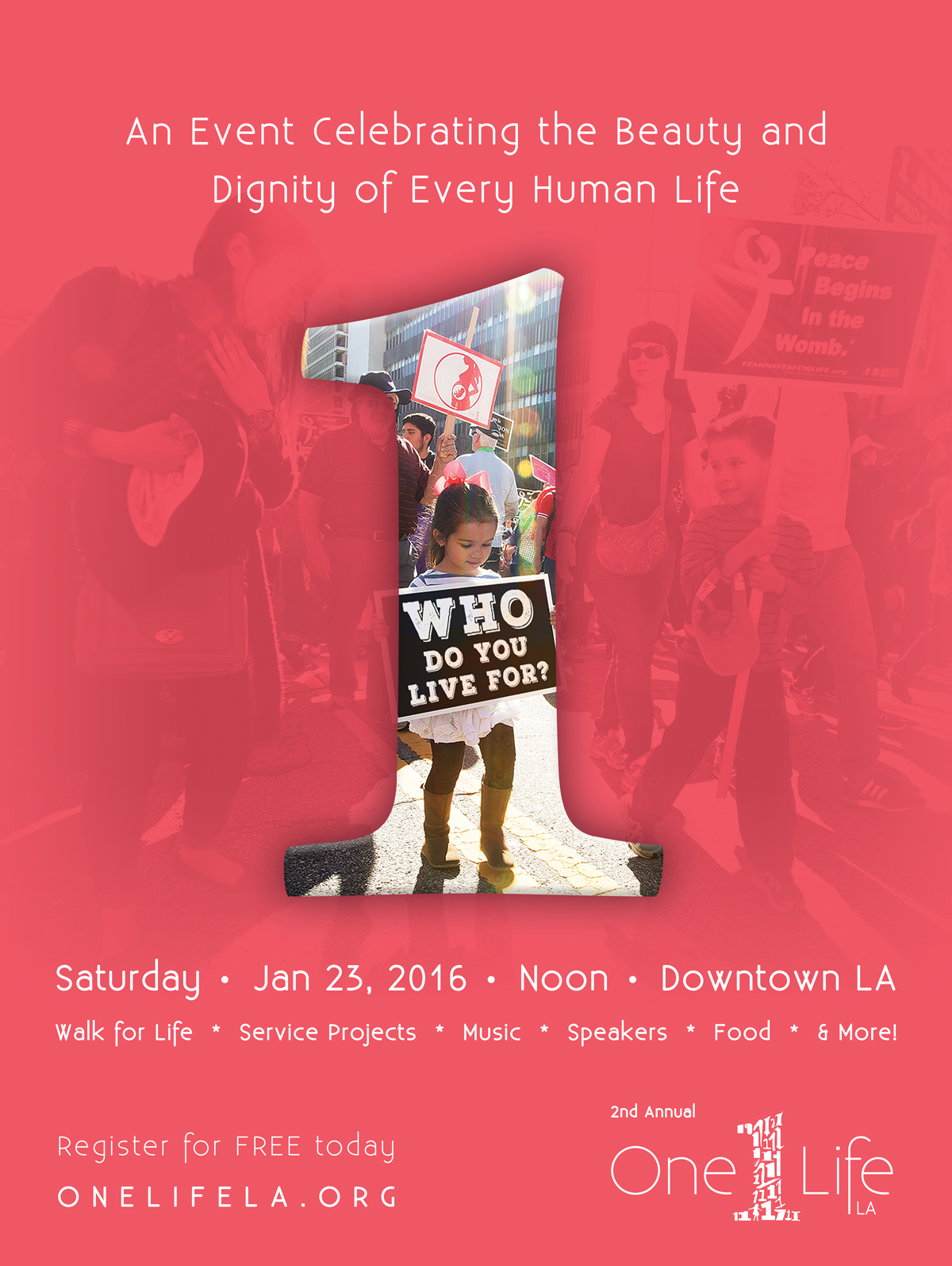 Mexican actress Karyme Lozano and actor Danny Jacobs, have been added to the roster of inspiring international and local speakers who will join Archbishop José H. Gomez at OneLife LA, on Saturday, January 23, 2016 at Grand Park (200 N. Grand Ave.) in downtown Los Angeles. OneLife LA is the only large-scale event that celebrates the beauty and dignity of every human life from conception to natural death in Southern California.

“This will be a day of family and friendship in celebration of the beauty and dignity of every human life – from conception to natural death,” said Archbishop Gomez. “Join me and thousands in declaring a commitment to valuing and protecting all human life, particularly the most vulnerable in our society.”

Inspired by the example of Pope Francis, OneLife LA seeks to promote a culture of life, where every human life is valued, especially the marginalized. The second annual event, themed “Who do you live for?” will start at noon (12 p.m.) with a walk led by Archbishop Gomez through downtown streets. It will conclude at 4 pm, followed by the “One Life, One Light Requiem for the Unborn” Mass celebrated by Archbishop Gomez at 5 p.m. at the Cathedral of Our Lady of the Angels. Visit http://archla.org/requiem for more information about the Mass.

OneLife LA keynote speaker, Nick Vujicic, who travels around the world sharing his powerful story of challenges and blessings despite being born without limbs, will speak about his passion for life and achieving victory over his struggles through faith. “If God can use a man without arms and legs to be his hands and feet, then he will certainly use any willing heart,” said Vujicic. His deep-rooted faith helped him see his disability as a blessing and formed the nonprofit organization Life Without Limbs when he was 17 years old.

OneLife LA speakers and presenters include:

In solidarity with Pope Francis’ call to show love to others during this Year of Mercy, OneLife LA is uniting with more than 20 community partners to encourage event attendees to get involved in community activities such as feeding the homeless, finding families for foster children, supporting pregnant women, and visiting the elderly. A local salon will offer free haircuts to attendees willing to donate their hair to an organization that creates hairpieces for ill children.Multiple organizations will join forces to create a space dedicated to human trafficking awareness and education, service projects sign-ups, and collection of clothing and toiletries for victims. For more information about OneLife LA community partners visit http://onelifela.org/sponsors-and-partners/.

OneLife LA, spearheaded by the Archdiocese’s Office of Life, Justice and Peace, was first celebrated on January 17, 2015. The event united nearly 15,000 people to “Be Somebody to Somebody” in their own communities through good works.

To follow OneLife LA on social media and for more information visit www.onelifela.org, https://twitter.com/1lifela, or https://www.facebook.com/1lifela.