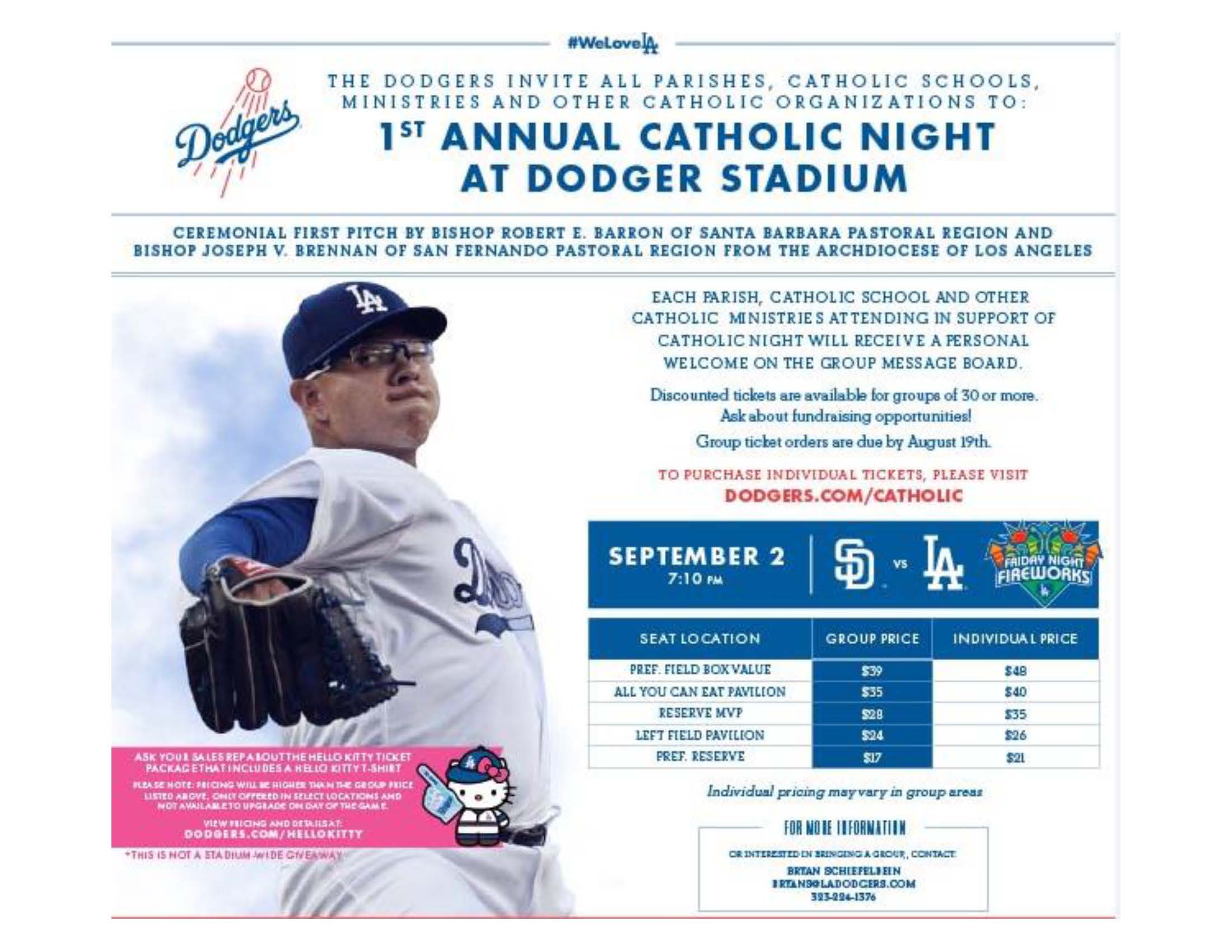 The Los Angeles Dodgers and the Archdiocese of Los Angeles will host the first ever “Catholic Night” at Dodger Stadium (1000 Elysian Park Ave.) on Friday, September 2 at 7:10 p.m., to celebrate the diverse Catholic community of the tri-county Archdiocese (Los Angeles, Ventura and Santa Barbara).

“I don’t want to date myself, but I remember going to Dodger Stadium as a kid when it was still pretty new. I never thought I would be on the field at Dodger Stadium, much less throwing a pitch,” said Los Angeles area-native Bishop Brennan. “Many summer nights were spent with the transistor radio listening to that lilting voice of Vin Scully. Although I was a lousy baseball player as a kid I still had ‘big league’ dreams and my favorite Dodger at the time was Jim Lefebvre.”

The Archdiocese is the nation’s largest and most culturally and socially diverse Catholic community, covering nearly 9,000 square miles in 120 cities in Los Angeles, Ventura and Santa Barbara counties. The nearly five million Catholics in Los Angeles come from some 70 countries and every continent. Last summer, Pope Francis named three new Auxiliary Bishops to the Archdiocese, including Bishop Brennan and Bishop Barron, who will be celebrating their first anniversary as Auxiliary Bishops just four days after the game.

“I’ve always thought that among many things, baseball teaches us how to attract people to Church. What attracts people to baseball, initially is the beauty of the game, the skill of pitching, hitting and catching the baseball and running the bases. The ‘infield fly rule’ and all the other intricate and sometimes arcane rules of any sport only have interest and relevance for people who already know and love the game. I am honored of being part of the first Catholic Night,” said Bishop Barron. “I’ve been a baseball fan since I was six years old, when my father took my brother and me to a Detroit Tigers game in the summer of 1966.”

Discounted tickets are available by visiting dodgers.com/catholic and will be offered to all parishes, schools, families and friends for the game against the San Diego Padres. The night will end with a firework show.