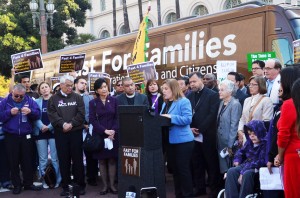 Auxiliary Bishop Alexander Salazar, joined by immigration rights leaders on Los Angeles City Hall steps, on Feb. 24 blessed the launch of the “Fast for Families” national bus tour to push for immigration reform.
“We fast to be in solidarity, to be united as a people to have a just immigration reform,” said Bishop Salazar, director of the archdiocesan Office of Life, Justice and Peace. He was joined by faith, community, labor, and political leaders, including Congresswoman Judy Chu (D-CA).
“Fasting is the soul of prayer and mercy is the lifeblood of fasting,” he said. “If you pray, fast. If you fast, show mercy. If you want your prayer to be heard by the Lord, then hear the prayers of others.”
During the blessing, Bishop Salazar celebrated the importance of family, which he described as the “building block of society.”
“We need laws, reform, to bring families together, in peace, in unity in this great nation that we have,” he said.
Labor leader Eliseo Medina, head of the Fast for Families campaign that started in Washington D.C. last November, said he would be traveling with other 15 people — plus the 11 million immigrants they would be representing — to 100 congressional districts to meet with leaders and bring attention to “this moral crisis facing America,” referring to deportations and separation of families. The route will cover more than 14,000 miles and end on April 9 in Washington D.C. at the U.S. Capitol.
Angelica Salas, executive director of the Coalition for Humane Immigrant Rights of Los Angeles (CHIRLA), urged Congressman John Boehner (R-OH), speaker of the U.S. House of Representatives, “to be courageous enough” to approve immigration reform this year.
“We have come too far to give up now,” she said. “As immigrants we are used to obstacles and working hard to achieve.”
People were requested to join the fast by fasting for a day, if possible every Wednesday, starting on Ash Wednesday (March 5) through April 9.

Photo caption:
“We fast to be in solidarity, to be united as a people to have a just immigration reform,” said Bishop Salazar, director of the archdiocesan Office of Life, Justice and Peace, during the Feb. 24 blessing of the national bus tour “Fast for Families” to push immigration reform.