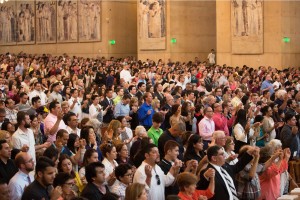 More than 10,000 people attended Easter Masses at the Cathedral of Our Lady of the Angels in downtown Los Angeles today, welcoming a record number of new Catholics who were baptized during last night’s Easter Vigil.

“Easter gives meaning to our lives and it also gives us a mission. Jesus is sending each of us into the world to continue his mission of mercy and love,” said Archbishop José H. Gomez, during his Homily. Video of the Archbishop’s Homily is available by visiting: https://youtu.be/4BRSiivNhZI.