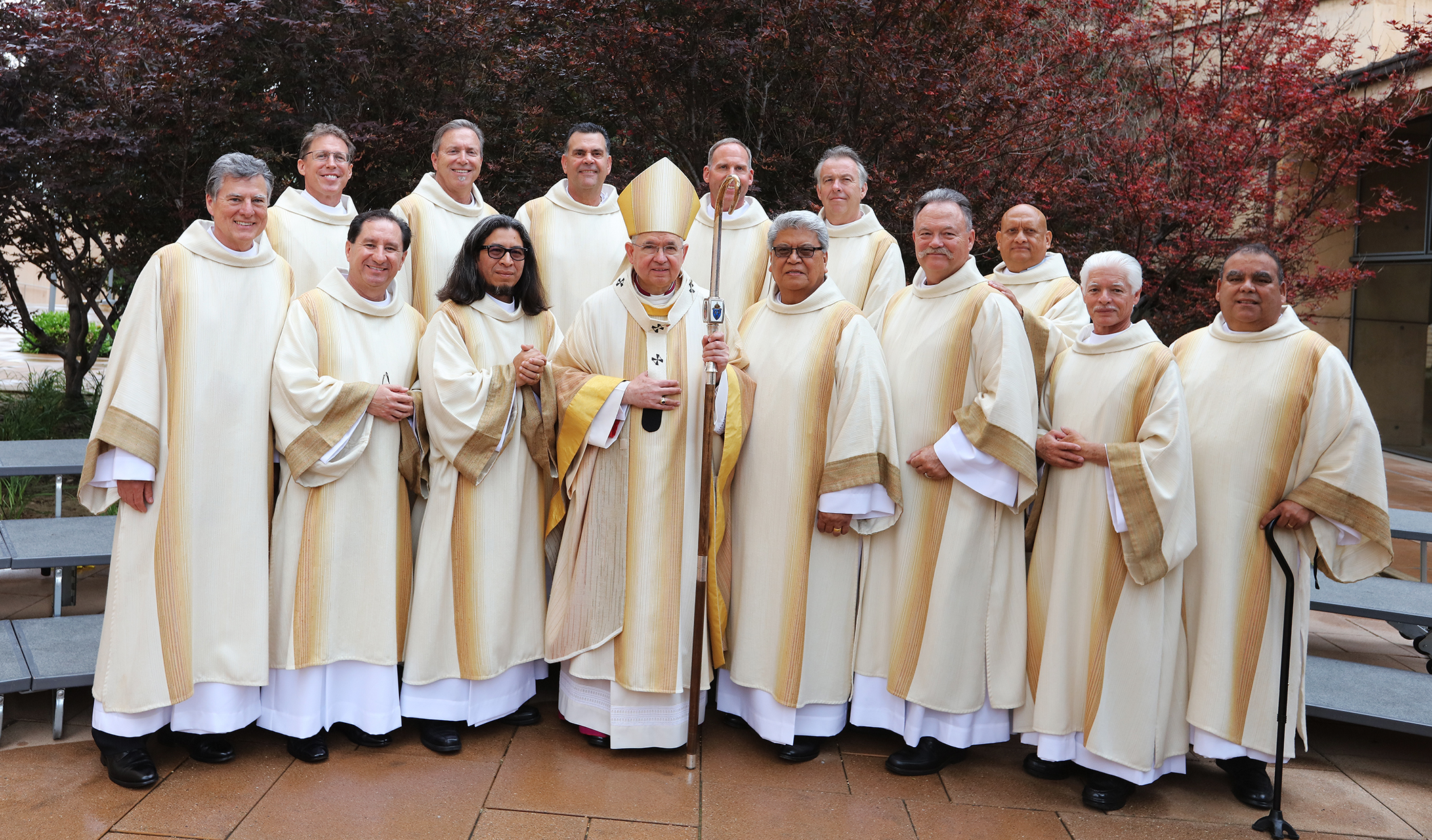 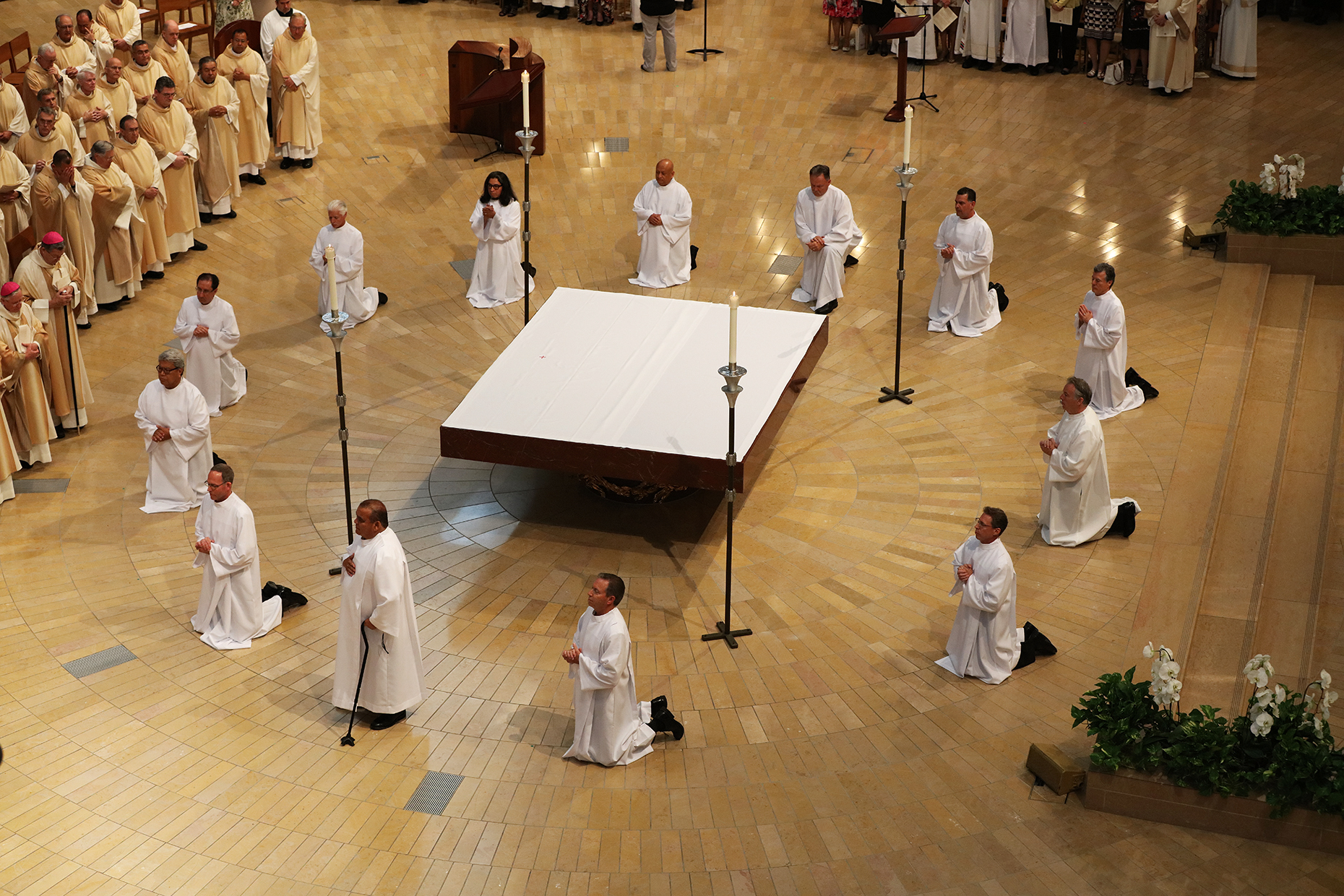 Archbishop José H. Gomez ordained today 13 new permanent deacons for the Archdiocese of Los Angeles at the Cathedral of Our Lady of the Angels in downtown Los Angeles. Restored in 1968 as a fully functioning ministry within the Church, the deacon is ordained to serve God’s people in communion with the bishop and his priests.

“The permanent diaconate is a ministry of joy!” said Archbishop Gomez. “You are becoming deacons at this time when our world needs a new witness to the reality of God’s mercy. As deacons, you are servants of love — and mercy is love in action. Mercy is the work of love, the true expression of the love that Jesus commands.”

In the Catholic Church, the diaconate is the first of three ranks in ordained ministry. Deacons preparing for the priesthood are transitional deacons, while those not planning to be ordained priests are often called permanent deacons. In both instances, the ministry of the deacon is the same. Married and single men may be ordained permanent deacons, but single men must make a commitment to celibacy at their ordination.

The twelve married men and one single man ordained on June 11 completed their theological formation during a five-year period, in preparation for ministry in their parishes. The formation process – when the deacons are accompanied by their wives – integrates academic, pastoral, human, and spiritual dimensions towards forming the couples and single men in ministries of word, liturgy, and charity.

“The principal function of the deacon is to collaborate with the bishop and the priests in the exercise of a ministry, which is not of their own wisdom, but of the Word of God, calling all to conversion and holiness,” said Deacon David Estrada, director of the Archdiocese’s Diaconate Formation Office. “Deacons serve God’s people by their witness to the gospel value of sacrificial love, and, by virtue of their secular employment, to the dignity of human work.”

The diaconate has its origin in apostolic times and flourished during the first four centuries of the Church’s history. The Second Vatican Council restored the diaconate as a permanent ministry in the Church to integrate and strengthen those who were already exercising diaconal functions, and to more fully serve the needs of the people.

The ordination Mass is a sacramental ceremony in which a man becomes a permanent deacon. The essential rite of the Sacrament takes place during the Laying on of Hands, followed by a special prayer of ordination and the presentation of the Book of the Gospels to each of the newly ordained as proclaimers, teachers, and witnesses of the Gospel.

Permanent deacons receive faculties to preach, to perform baptisms, funerals, and to witness marriages. They may assist at the Eucharist or the Mass, but cannot consecrate the host, hear confessions and give absolutions, or anoint the sick.

According to a 2014-2015 report from the United States Conference of Catholic Bishops, there were 432 permanent deacons in the Archdiocese of Los Angeles in that period, 94 percent of them were at least 50 years old.

Following is a brief profile of each one of the new deacons and their wives:

Jim and Karen Allgaier, of Our Lady of the Assumption Church in Claremont. Jim recently retired from his career in transportation after 42 years. Karen is a family nurse practitioner working in a private practice.  They both serve as lectors in their parish. Their ministries also include Get on the Bus, Respect for Life, visiting the sick, and bereavement.

Bill and Sylvia Betancourt, of Our Lady of the Valley Church in Canoga Park. Bill is a Field Applications Engineering Manager at Western Digital and Sylvia is a homemaker. Bill serves as lector at his parish and both are involved as Eucharistic Ministers and in detention ministry.

Brian Conroy and Esperanza Madrigal, of St. Mel Church in Woodland Hills.  Brian retired after a 40-year career in quality management. Esperanza works as a contracts manager at a major aerospace company. They both serve as ministers to the sick and hospice care. They also serve together in tribunal ministry and marriage preparation. Brian also serves as a catechist and as a spiritual director.

Pedro and Margarita DeLeon, of St. Joseph Church in Hawthorne. Pedro is a public accountant and a teaching assistant. Margarita is a housewife and owns her own cosmetology business. Pedro is involved in pre-baptismal classes and assists in baptism and funeral vigil liturgies. Margarita serves as lector and Eucharistic Minister. She also takes communion to the sick.

Gene and Peggy Gleason, of Beatitudes of Our Lord Church in La Mirada. Gene is an attorney and Peggy is a homemaker. Gene serves in bereavement ministry, as lector and as acolyte. Both serve in the parish food pantry and in Eucharistic Ministry.

Frank and Marsha González, of St. John of God Church, Norwalk.  Frank is an operations/data manager in the automotive aftermarket industry. Marcia is a client service manager at a local commercial bank.  Both are involved in bereavement ministry and with the archdiocesan Office of Life, Justice, and Peace on immigration citizenship.  Frank serves as lector at the parish, and Marcia serves as Eucharistic Minister.

Mauricio Guerra Ramos and Gilma H. Guerra, of St. Emydius Church in Lynwood. Mauricio works in graphic design and Gilma works as a cashier. Mauricio is a Eucharistic Minister, lector, RCIA catechist, visits the sick, and presides at funeral vigils.

Joseph and Audrey Hamamoto, of St. Cornelius Church in Long Beach. Joe is Senior Manager of Global Procurement for Panasonic Avionics Corp.  Audrey is a licensed insurance agent. They are involved in detention ministry, respect life, couples in community, RCIA and Cursillo.Both also serve as lectors and Eucharistic Ministers at the parish.

Phillip and Mary Nelson, of St. Thomas Aquinas Church in Ojai. Phil is a civil engineer, retired naval officer, and Director of Engineering at Amgen. Mary is a family nurse practitioner. Phil serves in bereavement ministry and both serve in youth detention ministry.

Dan and Lali Revetto, ofSt. John Baptist de La Salle Church in Granada Hills. Dan is Director of External Affairs for AT&T. Lali is a Professor in Biomedical Research at Cedars-Sinai Medical Center. Dan serves as lector and as Eucharistic Minister to the sick and homebound. He is also involved in bereavement and detention ministry. Lali serves in evangelization.

Santiago Salas Jr. and Guadalupe Salas, of St. Cyprian Church in Long Beach. Santiago is retired and Guadalupe works at Kaiser Permanente as a physician scheduler. He works in prison ministry and both serve in RCIA, make visits to the sick, and teach pre-baptismal classes.  Both are Eucharistic Ministers and lectors at their parish.

Louis N. Roche Jr., of St. Charles Borromeo Church in North Hollywood. Louis is a professional photographer and music producer. He is director of the parish service center and ministers to the sick and homebound.

NOTE: PHOTOS ARE AVAILABLE UPON REQUEST

To find out more about Archdiocese of Los Angeles news and events, or to subscribe to media alerts, please visit https://media.la-archdiocese.org.

Photo 2: The 13 new deacons are blessed during their ordination by Archbishop José H. Gomez on June 11 at the Cathedral of Our Lady of the Angels.