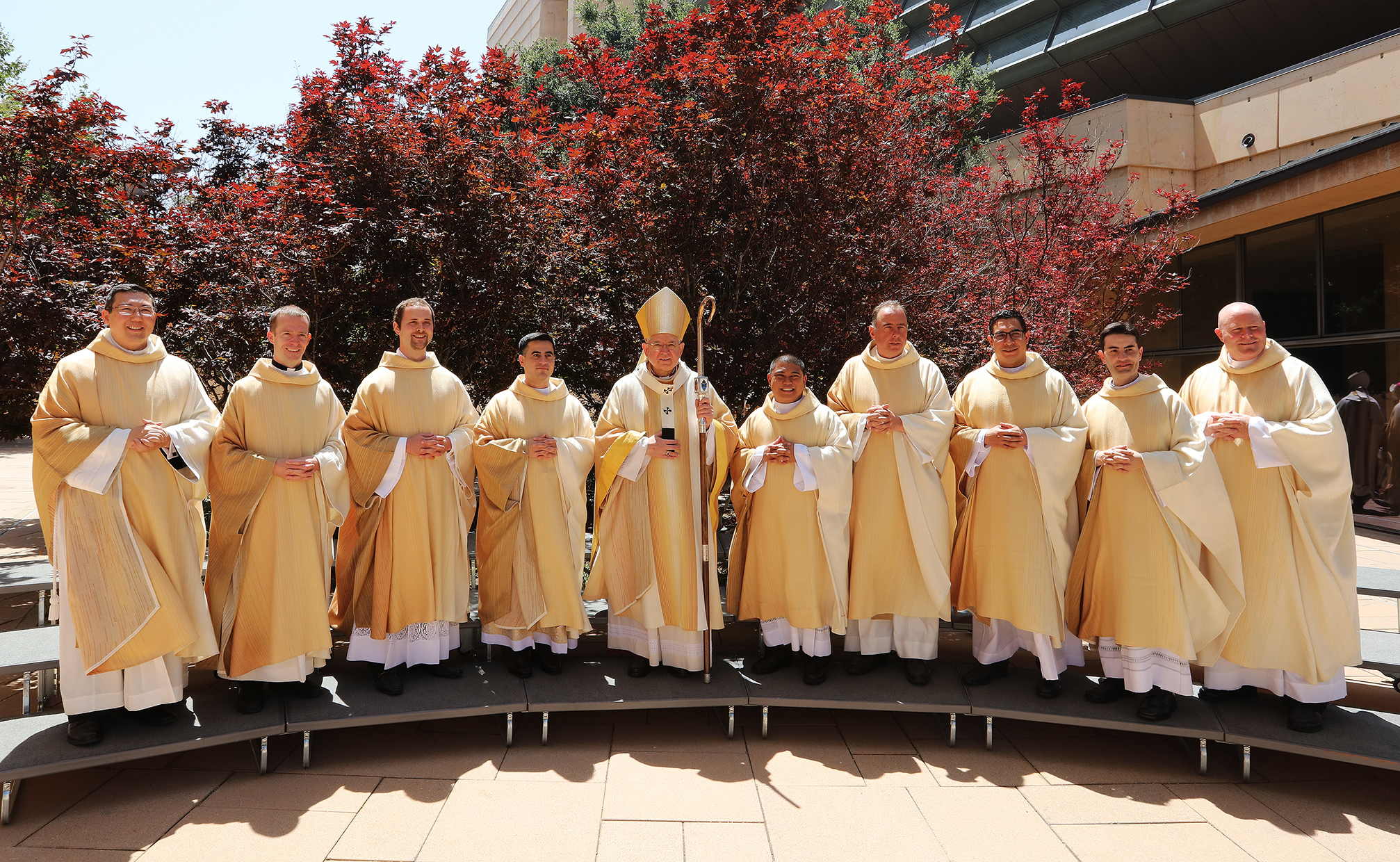 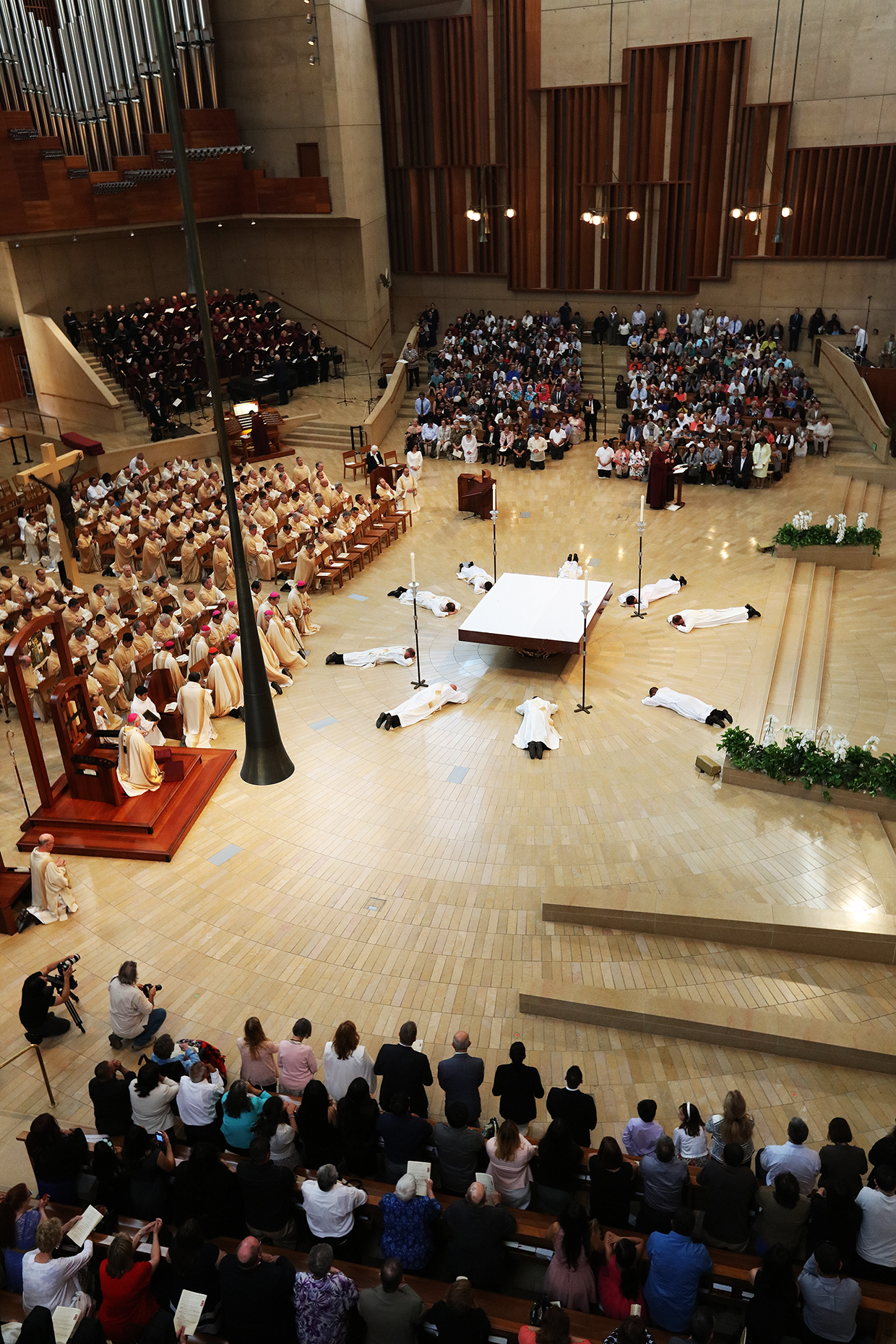 For second consecutive year, the Archdiocese ordains the largest group of priests in the last decade

“This is a day of joy. Every priest is the face of Christ and the heart of Christ,” said Archbishop Gomez. “We love a God who showed himself to us with a human face, who loved us with a human heart. We love a God who goes in search of the lost. This is the responsibility and privilege of the priest — to show the face of Jesus, to seek out the lost with his loving heart.”

“Ordination day is the fruit of many years of prayer, formation, spiritual and intellectual enlightenment and God’s grace,” said Father Stephen Davoren, director of the Archdiocese’s Office of Vocations. “The men have come from all walks of life and various stories, but all heard God’s call to serve as a priest. As Director of Vocations, I can say that the Lord calls humble and ordinary men to a life of extraordinary grace and beauty.”

Thirty new seminarians will be entering St. John’s Seminary and Gardena’s Juan Diego House of Formation for Seminarians in the fall.

The ordination Mass is a sacramental ceremony in which a man becomes a priest and is enabled to minister in Christ’s name and that of the Church. The essential rite of the Sacrament takes place during the Laying on of Hands and Prayer of Consecration, an ancient tradition in the Church, mentioned in the Bible.

Today’s ordination included various rituals, rich in meaning and history, including prostration. The men being ordained lay face down before the altar, symbolizing his dependence upon God and the prayers of the Christian community.

Upon conclusion of Mass, the new priests gave their first public blessings on the Cathedral Plaza surrounded by family, friends, members of their parish communities, their pastors and other priest mentors.

Following is a brief profile of each one of the new priests:

Fr. Jeffrey Baker, 31, from Glendale. He first thought of becoming a priest when he was an altar server in the fifth grade. Throughout high school and in college he was active in various ministries at his home parish, where he witnessed “incredible examples of excellent priests.”

Fr. Joshua Diener, 29, from Pasadena. Since high school he seriously considered the priesthood, but chose to pursue a music career. By the end of his undergraduate career he knew he had been called to join the priesthood.

Fr. Luis Espinoza, 33, from Michoacán, México. As a recently-arrived immigrant at 16 years old, he was feeling out of place and was facing difficulties in his family. He found solace after attending a youth retreat at a local Catholic church, and at that moment he knew he needed to share the love of God with others.

Fr. Paolo Garcia, 31, from Signal Hill/Long Beach. As a child, he regularly attended Sunday Mass with his family, and prayed the rosary together as a family, but it was not until his college years at UC Berkeley when he seriously began to envision his vocation to the priesthood, and after years of prayerful discernment he realized a life of service was his call.

Fr. Anthony Garcias, 41, from Westchester. His first thoughts of becoming a priest came when he was trained as altar server at St. Jerome Church in 4th grade. He began to seriously consider the priesthood during his time at UCLA; and his discernment grew after joining the Order of Preachers (Dominicans) as a religious brother from 1999 to 2006.

Fr. Gregorio Hidalgo, 43, from La Villa de D. Fadrique, Toledo, Spain. Priesthood was a strong feeling within his heart after watching the funeral of Pope John Paul II on TV. He was already living in Los Angeles and had been away from the Church for many years.

Fr. Matthew Murphy, 51, from Santa Clarita. The first promptings from the Holy Spirit came at an early age as an altar server at St. Didacus in Sylmar, where he attended school. His Catholic faith was challenged in high school and for the next 20 years he stopped going to church, until one day a friend inquired him about attending Mass. The next morning, he found himself at Mass and hasn’t stopped attending since. At some point he asked God what he wanted him to do and he discerned he was called to the priesthood.

Fr. Ethan Southard, 37, from Lincoln, Delaware. He had recently arrived in Los Angeles from Delaware when he first heard a calling to the priesthood one cold night at a soup kitchen in Hollywood, where he volunteered.

Fr. Albert van der Woerd, 56, from Leiden, the Netherlands. His priesthood vocation started with a visit to a mission from the Brothers of Our Lady Mother of Mercy in Kenya, a year after he was baptized at the age of 33. As a music teacher, he helped develop an outreach for liturgical youth choirs and offered spiritual formation. He confirmed his call to the priesthood when he attended World Youth Day in Cologne, Germany, in 2005.

Caption 2: The nine new priests prostrate in front of the altar at the Cathedral of Our Lady of the Angels during their ordination on June 4. Prostration symbolizes the priest’s dependence upon God and the prayers of the Christian community.