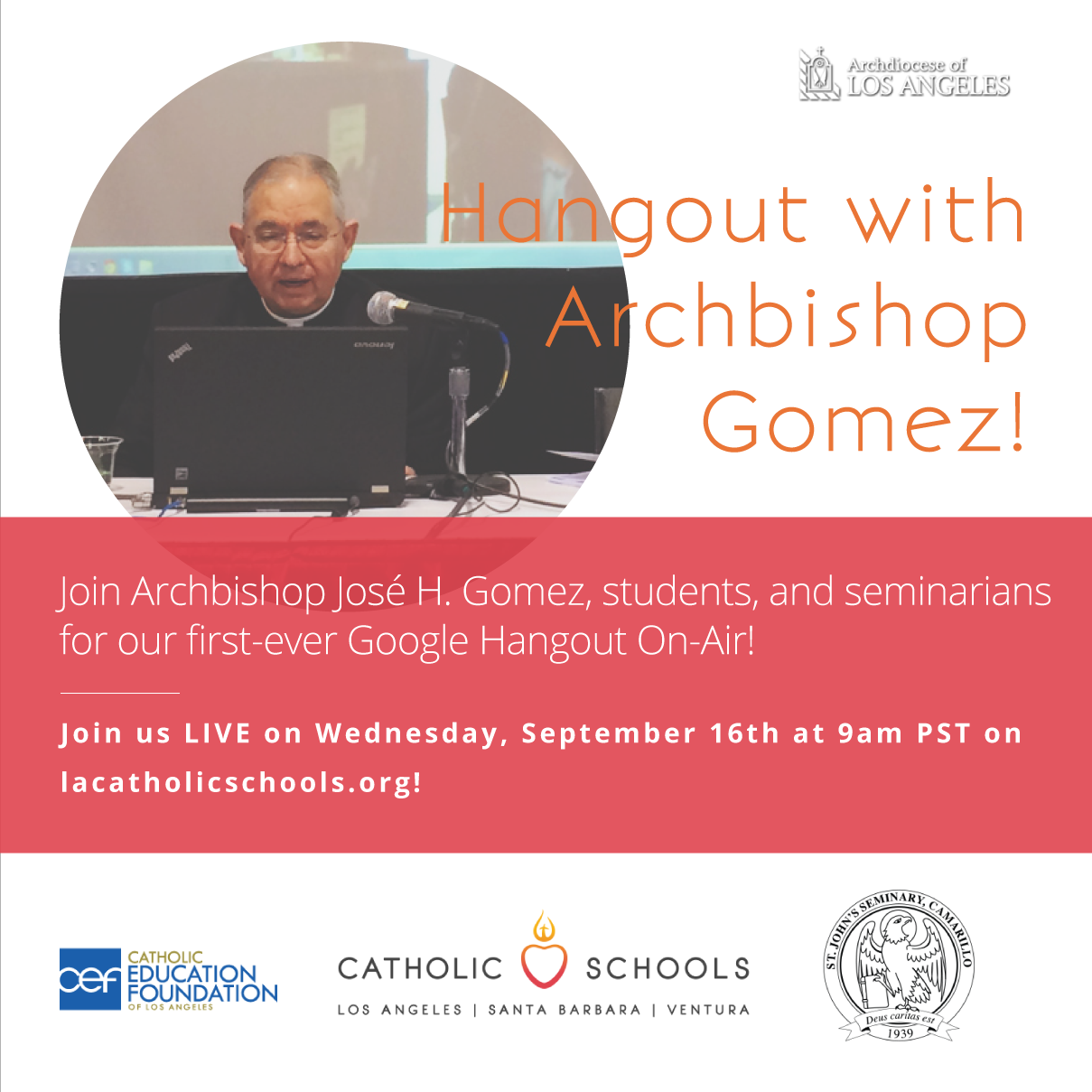 Archbishop Gomez responded live to questions about the upcoming Papal visit, the canonization of Blessed Junípero Serra and more on the 28th anniversary of Pope Saint John Paul II’s visit to Immaculate Conception School in 1987. At the end of the Hangout Immaculate Conception students presented the Archbishop with a tote bag filled with notes and prayer intentions for delivery to Pope Francis during his visit to the East Coast next week.

“Catholic education is the Church’s future,” said Archbishop Gomez. “It’s also the key to our society’s future. As our Holy Father Pope Francis said: ‘Young people are the window through which the future enters the world.’”

The Hangout virtually connected the Archbishop with Catholic students and seminarians from locations in different parts of the Archdiocese through new websites for Catholic Schools, St. John’s Seminary and the Catholic Education Foundation, which feature increased functionality and design aimed to better serve students, parents and the Catholic community.

“As we begin the year, the Catholic schools in the Archdiocese of Los Angeles are excited to once again provide to our students a high quality education, grounded in our Catholic faith,” said Dr. Kevin Baxter, ‎Senior Director and Superintendent of Catholic Schools of the Archdiocese of Los Angeles. We are especially excited to be re-launching our website, which is a reflection of our commitment to integrating technology throughout our schools so that students are well prepared for the 21st century world.”

The new St. John’s Seminary site is its first state-of-the-art website featuring a campus tour and testimonial videos that highlight the breadth of what the Seminary could offer to men who are discerning the priesthood. The site also provides lay students, alumni, faculty, clergy and the faithful with an opportunity to get to know the seminary and the people who are a part of it.

“St. John’s Seminary has begun its 76th year of classes with 30 new seminarians, the largest group in recent history,” said Reverend Monsignor Marc V. Trudeau, Rector of St. John’s Seminary. “We are excited to start this year by launching a new website that will reach out to our Catholic Community and be a tool for evangelization and a source of inspiration.”

The Catholic Education Foundation’s revamped website will serve as an online tool for its mission of providing tuition assistance for those most financially in need, so they may attend Catholic school in the Archdiocese of Los Angeles.

“We are committed to supporting our students throughout their entire educational lifecycle,” said Kathy Ash, Executive Director of Catholic Education Foundation. “Our financial support begins in Pre-K and follows students through their high school graduation. Providing tuition assistance is at the heart of what we do. We are committed to the success of our students, their families, the schools and the communities we serve.”