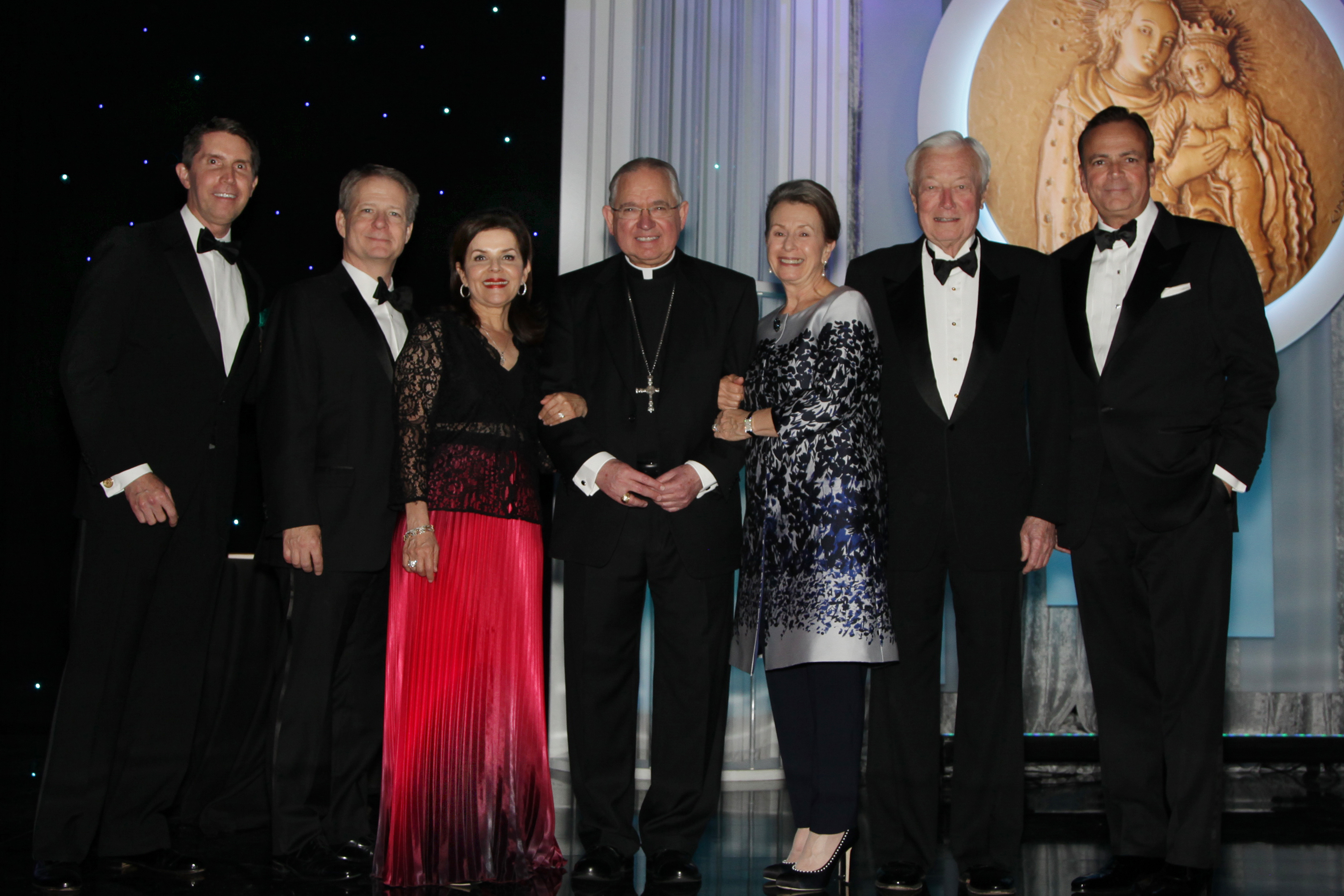 Six members of the Los Angeles Catholic community who have extensive and distinguished records of service received the 2017 Cardinal’s Awards on Saturday, March 11, at the Beverly Hilton Hotel in Beverly Hills.

“The Cardinal’s Awards Dinner is a celebration of our Christian duty to love and make our society better,” said Archbishop José H. Gomez. “Tonight we celebrate the generosity and achievements of five men and women in our Catholic community. Each of them gives us a beautiful example of Christian love. And together they show us the difference that love can make in our neighborhoods and in our communities.”

In addition to the Ahmanson Foundation supporting the arts, medicine, programs related to homelessness and low-income populations, Ahmanson is passionate about a relatively new project of the Foundation, the Ahmanson Veteran Scholarship Initiative that is to recruit, educate and retain student veterans by removing obstacles that stand in the way of college graduation. “These men and women have given so much to our country.  This is a way to restart their education and assimilate back to civilian lives,” said Ahmanson. For the past four years, the Foundation has given out grants to 24 private colleges and universities.  Over 230 veterans are currently receiving assistance.

There are many different causes in which Caruso is involved but they all come back to children, education and the Church. He feels strongly that it is important to invest in the next generation and their education so that they succeed. In 1991, he founded the Caruso Family Foundation, dedicated to supporting organizations that improve the lives of at-risk children in Los Angeles, with a focus on ensuring educational opportunities and quality health care for underserved youth. To that end, Caruso endowed the USC Tina and Rick Caruso Department of Otolaryngology – Head and Neck Surgery at the Keck School of Medicine, as well as the USC Caruso Catholic Center, now one of the top five collegiate Catholic centers in the nation. Among the many nonprofit organizations that he supports, Caruso is actively involved with Operation Progress, Para Los Niños, St. Lawrence of Brindisi School and Verbum Dei High School, all focused on the historically underserved area of Watts, Los Angeles. Additionally, he is committed to a large number of other organizations including St. John’s Health Center, St. Paul the Apostle, St. Monica’s Catholic Church, the Catholic Education Foundation, St. Lawrence School, St. Mary’s Academy, St. Francis High School and St. Anthony High School.

Hickey was this year’s Cardinal’s Awards Dinner surprise honoree and was recognized for his loyal history of participation in the Cardinal’s Awards Committee. Hickey is a Knight of Malta and St. Gregory, and a graduate of the University of California, Berkeley and Loyola High School, which he continues to support with his time and treasure. He is a Eucharistic minister at the Cathedral of Our Lady of the Angels and Church of the Good Shepherd in Beverly Hills.

Ibarra and her husband have devoted much of their energy to the Catholic Association of Latino Leaders (CALL), which is dedicated “to serve, evangelize and give.” Founded by Archbishop Gomez, the Ibarras helped start the Los Angeles CALL chapter and both serve on the Board. “CALL’s first project was with the Juan Diego House for Priestly Vocations where young men are discerning whether to take vows,” said Ibarra. Moved by learning about at-risk teens, the Ibarras added an international component to their philanthropic efforts by founding Los Niños, raising funds for the construction and management of a rehabilitation home for teenagers in Mexico, Serbia and Montenegro.

Fifteen years ago, Weber and his family moved from Los Angeles to Santa Barbara after being an integral part of the LA community, devoting time to St. Paul the Apostle School and Church, the Rotary Club of America and the Catholic Education Foundation for over 40 years. A big believer in Catholic education, Weber is most passionate about his work at Notre Dame School where two of his four daughters volunteer.

Willison says that the Catholic faith defines her philanthropy. In addition to her work with the Carmelite Sister’s Santa Teresita, St. Genevieve School in Panorama City, and leading a $33,000,000 fundraising campaign for St. Monica parish, Willison is a part of the Archdiocese’s Development steering committee, concentrating on the Juan Diego House for Priestly Vocations where young men are discerning whether to take vows. “We need more priests. Church leadership is key here and it is important to work with them in supporting vocations. Given the gift of increased vocations in our city, we are concentrating our fundraising efforts on one house for formation where seminarians can live as community,” said Willison.

This year, the Cardinal’s Awards Dinner will benefit the Archdiocese’s Catholic Education Foundation (CEF), which is celebrating 30 years of making Catholic education a possibility for all families by providing tuition assistance to the most financially deserving students. In 2016, CEF provided $13.3 million to help fund the Catholic educations of more than 10,000 elementary and high school students from families living at or below the poverty line. Students receiving CEF assistance have a graduation rate of 98 percent and a college attendance rate of 98 percent.

At its inception, in the late 1980s, the dinner’s sole focus was to pay tribute to those who had given so graciously to the community. The Cardinal’s Awards Dinner committee felt strongly that if there were residual funds, those funds needed to be directed to the poor of the five pastoral regions. Over the past 20 years, the Cardinal’s Awards Dinner has raised more than $10 million to support parishes, schools, institutions and social services throughout the Southern California community.