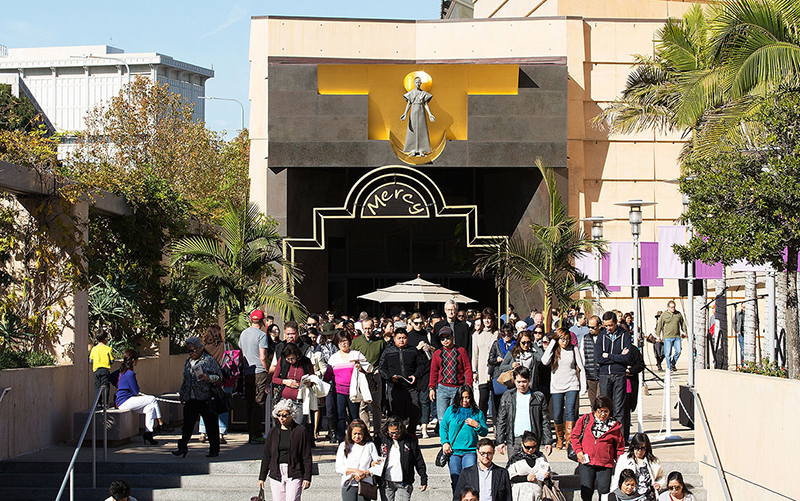 As Pope Francis has declared this coming year to be an Extraordinary Jubilee of Mercy, Archbishop José H. Gomez blessed today the Holy Door and celebrated the opening Mass of the Jubilee Year of Mercy at the Cathedral of Our Lady of the Angels. “No one can be excluded from the mercy of God; everyone knows the way to access it and the Church is the house where everyone is welcomed and no one is rejected,” said Pope Francis. Pilgrim churches worldwide will begin opening Holy Doors today.

Archbishop Gomez also ceremoniously opened the Great Bronze Doors of the Cathedral, which haven’t been closed and opened since the Cathedral’s inauguration in September 2002.

A special Year of Mercy Jubilee Door is being featured at the Cathedral. The freestanding piece, entitled “Archway of Mercy,” located at the plaza, was designed by Los Angeles artist Gayle Garner Roski, who chairs the Cathedral’s Fine Arts Committee. Made of steel and wood, the work incorporates the word “Mercy” and geometric shapes intended to complement the Robert Graham Bronze Doors and the architecture of the Cathedral. In consultation with draftsman Oscar Peria, the piece was constructed by master carpenter Elmer Perez. The Archway of Mercy will be blessed at the start of each of the Masses on Sunday by different priests.

The Jubilee Year of Mercy began on the Solemnity of the Immaculate Conception, Tuesday, December 8, with the opening by Pope Francis of the Holy Door at St. Peter’s Basilica. It will conclude on Sunday, November 20, 2016 with the Solemnity of Christ the King.

The purpose of the Jubilee Year of Mercy is to forgive the sins of those who have truly repented so they can strengthen their faith and give testimony. Pope Francis declared it a period of grace and forgiveness, when indulgences, or pardon of sins, will be granted to the faithful seeking forgiveness through the sacrament of penance and reconciliation (confession), and pilgrimage to churches, and in turn offer forgiveness to others and themselves.

In his homily on December 8, Pope Francis reminded the world of the missionary journey of the Catholic Church, “encountering people where they live: in their cities and homes, in their workplaces.” The faithful are asked to proclaim and live by the word of God’s mercy, doing works of mercy, or reaching out to others in need, to help strengthen and accompany them through their struggles.

Parish communities throughout the Archdiocese will host and participate in various Year of Mercy activities including: Mercy in the Streets which involves priests, deacons and lay leaders going into the streets in outreach to brothers and sisters and providing the opportunity for reconciliation and confession; and Mercy Nights, where speakers will provide interactive presentations, in English and Spanish, on different topics relating to mercy, as outlined by Pope Francis in his declaration for this Jubilee of Mercy.

According to the Vatican’s website, the jubilee year has its roots in the Monastic law when every fiftieth year was made holy for the Jewish people. Debts were canceled, slaves were freed, and lands were restored to their “original owners.” Ordinary jubilees occur every 25 or 50 years, and extraordinary jubilees, like the Year of Mercy, are called for some momentous occasion. Two extraordinary jubilees were called in the 20th century – 1933, to mark the 1900th anniversary of Christ’s redemption in 33 A.D., and 1983, its 1950th anniversary.

For more information of Year of Mercy in the Archdiocese of Los Angeles, a list of pilgrimage churches and more resources, please visit www.seekmercy.org.

NOTE: Photos can be made available upon request.