Home   |   Press Releases   |   2015 RELIGIOUS EDUCATION CONGRESS – WHICH UNITES 40,000+ CATHOLICS FROM THROUGHOUT THE WORLD – KICKED OFF TODAY WITH YOUTH DAY

2015 RELIGIOUS EDUCATION CONGRESS – WHICH UNITES 40,000+ CATHOLICS FROM THROUGHOUT THE WORLD – KICKED OFF TODAY WITH YOUTH DAY

PHOTO TWO: More than 15,000 high schools students, many of them holding up phone flashlights, filled the Arena at the Anaheim Convention Center today for a Youth Day rally and liturgy, with Archbishop José H. Gomez presiding. The event marked the opening of the four-day 2015 Religious Education Congress at theAnaheim Convention Center.

NOTE TO EDITORS: Media interested in covering the 2015 Religious Education Congress are asked to call the above contact to coordinate access inside the Convention Center. For a complete schedule and livestream in English and Spanish throughout the four-day event, please visit,  www.RECongress.org. 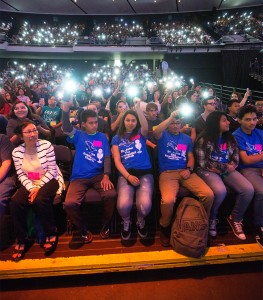 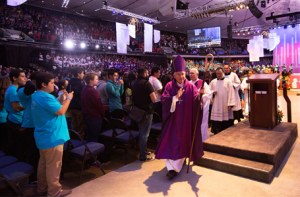 Religious Education Congress, from March 12-15 at the Anaheim Convention Center, will include 200+ workshops and events in English, Spanish and Vietnamese

“I pray that these days of formation, fellowship and prayer at Congress will deepen our understanding of our Catholic faith and enrich our relationship with Jesus Christ,” Archbishop Gomez said. The Archbishop’s homily from Youth Day is available at: http://archla.org/abg031215.

During Youth Day, students from throughout the Archdiocese of Los Angeles and beyond filled the Arena at the Convention Center to celebrate their faith through Eucharistic celebrations, workshops and musical performances.

The Religious Education Congress runs from March 12-15 at the Anaheim Convention Center. The largest annual gathering of its kind, the event draws more than 40,000 Catholics from the United States, Canada, Australia, Mexico, United Kingdom and other parts of the world. The four-day event includes, more than 200 distinguished speakers, presenting more than 300 workshops, in addition to Liturgies, an Exhibit Hall, live entertainment and art.

The Congress, sponsored by the Archdiocese of Los Angeles’ Office of Religious Education, began in 1968 as an “institute” for religious education teachers. It has since grown to include people of all vocations and different faiths with events held in English, Spanish and Vietnamese.